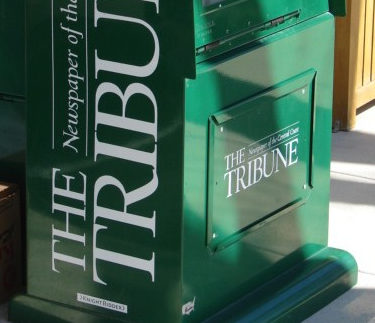 Having written on this topic many times before, the San Luis Obispo Tribune keeps giving more excuses to take their editorial staff to task. The latest: their coverage of Adam Hill’s obscene emails and their recent editorial on the District 3 supervisorial race that attempted to provide cover for Hill’s indiscretions.

First, was their implying that the emails coming from Hill’s home computer may not have been written by Hill himself. How naïve! I’ve attached at the end of this piece a verbatim email that Hill sent me in 2017 from the county’s own website. It clearly demonstrates his culpability in writing obscene, salacious, and false nastygrams.

Having been on the receiving end of many such emails from him over the years, I have no doubt that he sent those emails to radio host Dave Congleton. Sexual innuendos are part and parcel of Hill’s own DNA.

That Hill browbeat Tribune reporter Monica Vaughn when she interviewed him about the emails should have clearly shown the Tribune Hill’s true colors.

Second, was the Tribune’s questioning of the timing of CalCoastNews’ release of Hill’s 2016 emails to Congleton. The Tribune has done its best to provide cover for Hill’s behavior for years in the hopes that Hill and his so-called “Progressive” allies would continue in power. Perhaps it was just because CCN scooped the Tribune that its editors felt they had to contrive another cover for his misbehavior.

Third, was the Tribune’s publication of letters decrying Stacy Korsgaden’s courageous disclosure of a series of female student complaints about Adam Hill’s performance as a Cal Poly Professor that revealed their discomfort with Hill’s constant airing of his sexual obsessions and his “sexual harassment and sexual coercion” of some of his students. Alleging Korsgaden’s ads “showed a lack of integrity”, what about Hill’s “integrity” in continuing this type of obnoxious behavior?

For those who are thinking about voting for Hill, these truthful disclosures must make it difficult for them to openly support and defend such a deeply troubled candidate. It’s hard to understand how anyone could elect such a person to public office.

Twelve years of Adam Hill has been more than enough. Come March 3, let’s retire Adam Hill once and for all.

T. Bone, you little minx. It’s 2017! Everything is fluid now, no longer will your patriarchal controls be accepted by most humans! Lighten up, you’re no doubt attractive and even intelligible (not necessarily intelligent) to some—especially trolls with the same ugly old-fashioned impulses as you ! Why must you obsess over one human (me) who doesn’t dig your prescriptions?

I tried to let you down easy but you crave something I won’t and can’t give you. When you continue to obsess over me and accuse me of a variety of crimes and mismeanors and then have to get some wrecked/wretched blogger to carry out your garbage, all I see is a big bulbous, hilariously pompous sack of woe who needs to be hugged. A lot. Lots of hugs, T. Bone. You are one sad/mad hombre.

Alas, I must tell you again I am not interested in your affections no matter how you disguise them in your uniquely enigmatic manner of yawping. No matter how low you go, I will not give into your mysterious charms, though certainly there are others, especially the broken souls who have discovered anonymity has a friendship circle waiting in any online forum. What I am suggesting, is you look for love in the right places, T. Bone, those places where you can be accepted for who you are even if who you are is but a lie you’ve been telling yourself for 70 years.

Good luck and Godspeed, my little poisonous angel. Should you ever need a book recommendation or the name of good pizzaria in New Jersey, then feel free to contact me. (Actually, the satire applies to that too… it’s so difficult to say goodbye to one who obsesses so literally as to wet himself into words he must then see printed…but ta-ta.)