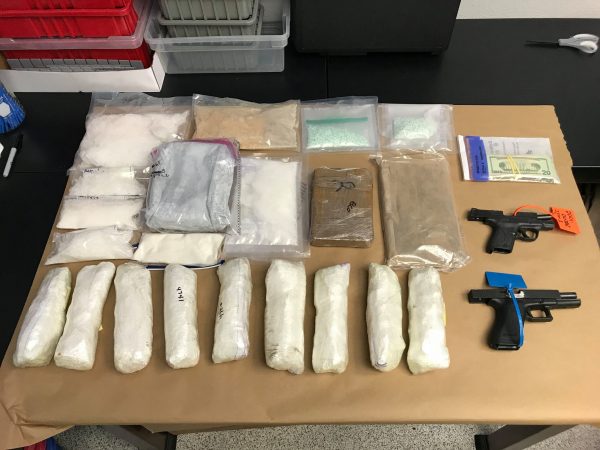 Following a nearly year-long investigation, the San Luis Obispo County Sheriff’s Special Operations Unit seized more than $600,000 worth of drugs last week from a pair of SLO residents whom authorities claim were bringing narcotics directly from Mexico to the Central Coast.

Last March, authorities launched an investigation into a narcotic trafficking operation in SLO County. Over the course of the past 11 months, the SLO County Probation Department, Homeland Security Investigations, Customs and Border Protection and the CHP all participated in the investigation, according to the sheriff’s office.

On Feb. 19, at the request of the Special Operations Unit, the CHP conducted a traffic stop on Highway 101 near Santa Maria. CHP officers stopped a car being driven by Timothy Keith Moore, 41, of SLO.

Authorities arrested Moore for conspiracy to transport or sell narcotics and possession of a controlled substance for sale, as well as gun related charges.

The following day, sheriff’s deputies conducted a traffic stop on South Street in San Luis Obispo in order to serve a search warrant for a vehicle being driven by Jesse Daniel Talaugon, 38, also of SLO.

A search of Talaugon’s vehicle netted approximately 2.5 pounds of methamphetamine, pre-packaged baggies containing suspected heroin and suspected Fentanyl, as well as $4,000 in cash. Deputies arrested Talaugon on charges of conspiracy to transport or sell narcotics, possession of a controlled substance for sale and transportation of a controlled substance for sale, as well as for gun related offenses.

Following Talaugon’s arrest, detectives served a warrant at a home in the 100 block of South Street that was associated with both suspects. The search of the home netted about 10 pounds of methamphetamine and three quarters of a kilogram of heroin, as well as scales and two handguns.

Sheriff’s officials say it is believed Moore and Talaugon had a network of people bringing narcotics directly from Mexico to SLO County. The sheriff’s office has not elaborated on the allegation.