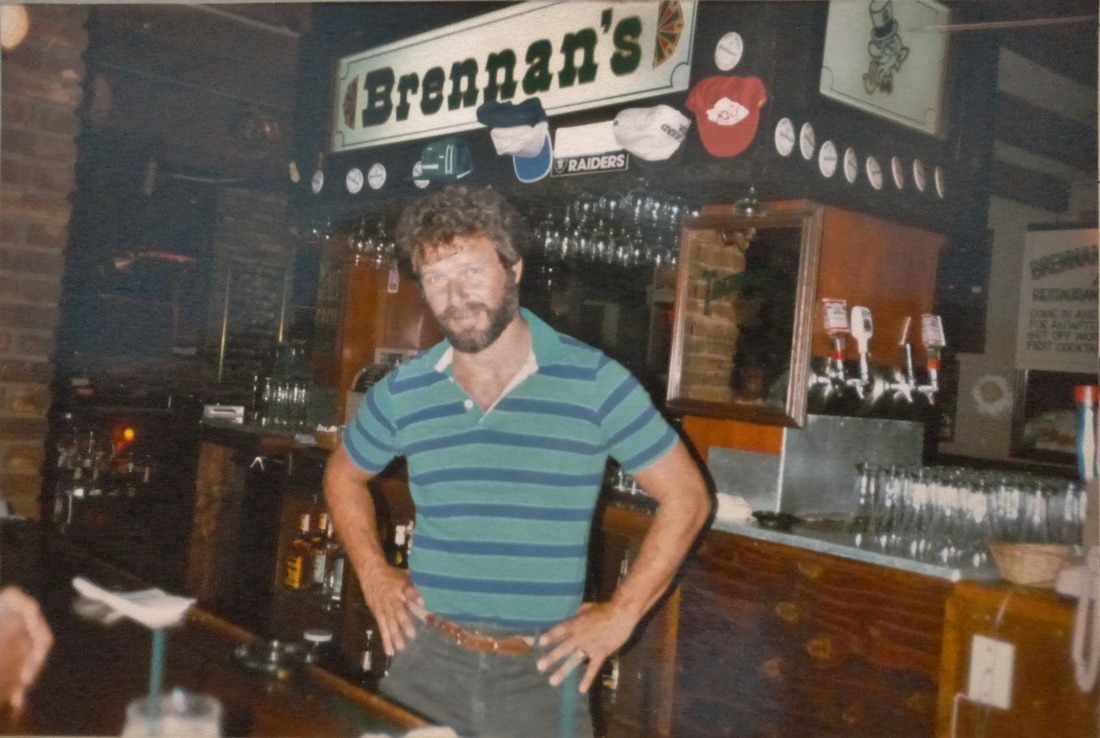 Dave hated me. Wanted to fight me. Wanted to kick my ass. Felt I upstaged and up-ended him in every way. He was the unofficial leader of the “Brew Crew,” a notorious pack of young fishermen and deck hands who, when they were in town, terrorized Happy Jack’s like wild west cowboys treeing a saloon after a long cattle drive.

I had just started at Happy Jack’s after moving—reluctantly as the “new sheriff in town”–from tending bar across the street at the old Circle Inn (now Legends), where it was peaceful. I’d stood in the doorway witnessing the bodies flying out the front and back doors and tumbling into the streets, the cops pulling up, and sometimes an ambulance arriving.

The owner, Dave Tope, and night bartender Jacki, a former stripper, came over and asked me to go to work at Happy’s because nights were especially out of control and they’d heard I was a professional. I went for one reason—I’d make five times the money in tips, especially working wild weekend band nights.

So right away, on my first shift, when the Brew Crew showed up and sized me up and commenced raising hell in the poolroom, throwing each other around, smashing balls and slamming cues on the tables, I bellowed at them to cease, asked them if they behaved this way in bars down on the Embarcadero, and threatened to eighty-six them immediately—which meant now!

Nobody was more infuriated than Dave, a son and grandson of a legendary Morro Bay fishing family whose roots were in Denmark. A strapping man in his late twenties, he sneered at me when ordering a drink. He made it plain he wanted a piece of me just by the murderous glares he aimed at me after I served him.

The one decision I’d made before taking the job was not to fight, especially with fishermen. If you won, you had to fight them again. Some of these guys fought each other over and over again. Fighting in Happy’s was some sort of rite of passage, but I’d been through that and always considered it stupid and senseless and had no real stomach for fighting, avoided it all costs, though I did have some boxing training and the physical tools to more than defend myself.

But, it seemed, sooner or later I’d have to fight Dave, a man I did not dislike, and who, it seemed, everybody liked for his friendliness, generosity, genuineness, and easygoing nature. He was one of the most popular and respected people on the waterfront, a person with more friends than anybody, a guy everybody wanted to buy a drink before he bought you one.

But it all came to a head on a weekend night before the day he was to be married. Members of the fishing community came from as far away as Washington state to attend his wedding and later the party at the Cayucos Veteran’s Hall.

By this time, there was probably at least thirty people milling around, staring at us. Dave moved to the sidewalk, and planted himself there.

“You’re too drunk to fight,” I told him, as the stares rained down and the crowd grew.

“Bullshit! Fucking coward. You been fucking with us since the day you started! Nobody likes you. And I’m gonna kick yer goddam ass!”

I felt, if we were both sober, it would be a good fight. I’m not as strong as most fishermen, and certainly at that time was not as strong as Dave, but, at 48, I was in tip-top shape from basketball, I was quick of hands, and, most important, at this point in the night, I was sober and he was drunk, very drunk, actually weaving as he roared at me, face beet red.

“C’mon!” he insisted. “I’ll tie one hand behind my back, asshole! I’ll kick yer sorry ass with one hand!”

“Fuck that! I want you nowww!”

Nobody else was saying anything. Fishermen love to see a good fight. So, as Dave bristled and continued challenging, berating and threatening me, I spied his at-least-100-pound Rottweiler, Bear, tied to a tree about ten feet away.

Bear looked distressed. He went everywhere with Dave. Went with him on all fishing trips. Was an endearing fixture on the waterfront. It was my belief Dave loved Bear more than the woman he was about to marry.

So I said, while looking at Bear, “Dave, I’m not afraid to fight you, but I don’t have the heart to hit you and try and hurt you in front of your beloved dog, Bear.”

He froze. His face went slack. His shoulders sagged. I thought he’d start crying. He glanced at Bear. He looked up at me. He hung his head. He looked up.

“I’m sorry,” he said in a lowered tone of voice.

He stepped forward a foot or two. “Can you come to my wedding reception tomorrow?” he asked, like a little kid. “Please?”

“Thank you, man,” he said. He stepped forward, offered his hand, which I shook, and then turned and went to Bear, untied him from the tree, and wobbled off with the Brew Crew and a horde of buddies.

His wedding party was one of the funnest, wildest wingdings I’ve ever attended. And, since Dave was so revered by the fishing community up and down the coast, I was suddenly accepted by the locals who had so far been downright dismissive of me as a distrustful outsider, an intruder, maybe an enemy and, of course, worse yet, a pansy.

Later on, there were blustery nights when I had trouble on my hands with out-of-town roughnecks looking for a fight, and I’d have to go out and try and settle things (we had no bouncer). And if Dave was in the bar he was always beside me, saying, very quietly, “I got your back, bro.”

When I wrote a feature story for the New Times in 1996 on the “Life and Lore of Morro Bay Fishermen,” Dave was one of my primary sources of information. He took me on a guided tour of his boat, the Skagerrak, and explained to me the basics and intricate modern technology of deep sea commercial fishing, some of the primitive strategies his grandfather employed, as well as the history of his fishing family.

There was nobody prouder of their profession.

Years later, Dave died tragically, heroically at sea. The entire fishing community of Morro Bay and points north and south were devastated. He was a young man, with wife and child. The funeral and memorial at the Morro Bay Vet’s Hall was the biggest I’d ever seen, flowing out the doors.