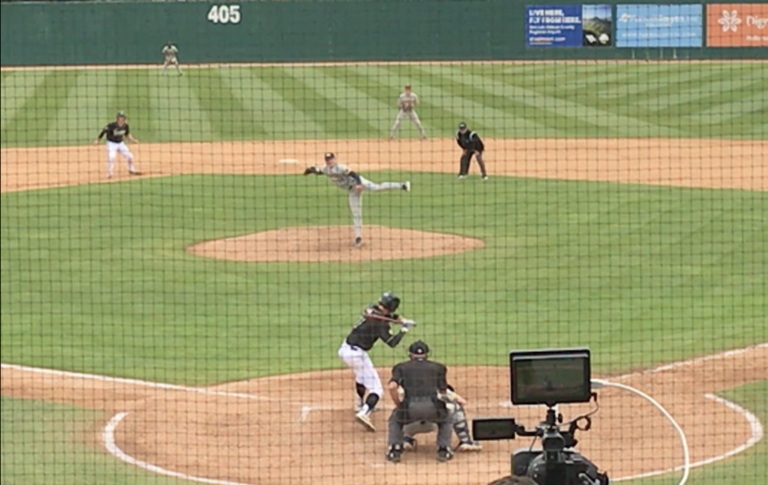 In a pre-Election Day special, the 5th-ranked Michigan Wolverines rallied in the late innings Sunday to defeat the Cal Poly Mustangs 4-2 and win the deciding game of a non-conference series played this weekend in San Luis Obispo.

Fueled by a strong pitching performance by freshman righty Drew Thorpe, Cal Poly took a 1-0 lead into the sixth inning. But, the Wolverines scored one run in both the sixth and seventh innings.

Michigan then snapped a 2-2 tie in the eighth on an RBI single by third baseman Cam Hart. Wolverine Ted Burton added a sacrifice fly to give Michigan an insurance run.

The Mustangs put two runners on base with two outs in the bottom of the ninth. But, Michigan closer Ben Keizer struck out Cal Poly third baseman Nick DiCarlo to end the game.

Thorpe, an early season surprise for Cal Poly, pitched six and a third innings, surrendering two runs on nine hits and striking out eight. Thorpe is 1-0 with an ERA of 1.69 following his first three collegiate starts.

Winning pitcher Blake Beers gave up two runs, only one of which was earned, over eight innings. Beers has now beaten Cal Poly twice in the 2020 season.

In 2019, Michigan came within one game of winning the national championship, losing to Vanderbilt in the College World Series title game.

To start the 2020 campaign, Cal Poly played both Michigan and Vanderbilt in a season-opening tournament in Arizona. The Mustangs emerged 2-1 from the tournament, beating Connecticut and losing to Michigan before defeating the defending national champs 9-8, capped by a bottom of the ninth rally.

But since defeating Vanderbilt, the then-No. 1 ranked team, the Mustangs have struggled. With Sunday’s loss, Cal Poly fell to 4-8 on the year. Michigan improved to 6-4.

Cal Poly hasn’t qualified for the NCAA Tournament since 2014. Still, the current team has garnered some attention, due in part to its early season defeat of Vanderbilt, as well as its highly touted freshman shortstop — who is thus far a no-show on the field.

Last year, Head Coach Larry Lee’s son, Brooks Lee, turned down $2 million or more by opting to attend Cal Poly and play for his father, rather than becoming a professional baseball player immediately following high school. Brooks Lee, a graduate of San Luis Obispo High, has yet to make his collegiate debut because of an injury he suffered during fall practice.

Brooks Lee is expected to take the field for Cal Poly in late March or early April.

Despite Cal Poly’s location in the contested 5th District of SLO County, no campaign ads appeared on the Baggett Stadium outfield wall Sunday. Nor were any robocalls played by the public address announcer.

The Mustangs continue their non-conference schedule with an Election Night matchup at Santa Clara on Tuesday. They then return home for a weekend series starting Friday against a potentially-ranked Baylor squad.