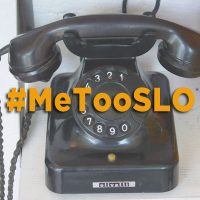 Isn’t it time the attacks on women, gays, and others, coming from an elected official, ends? It is a sad day when Progressives who purport to stand with women and the LGBTQ community support a bigoted, homophobic bully.

It’s time you speak up. Everyone. If you have been bullied, intimidated, or threatened, you have a duty to your community to speak out. Did you receive an email or Facebook post or text or personal confrontation? It needs to be mentioned. Even if it’s a one sentence letter to the editor. If not publicly, to District Attorney Dan Dow at ddow@co.slo.ca.us. Do it now. Stand up. #MeTooSLO.

I sit in awe, looking at the campaign mailer sent by the challenger. She looks to me like a strong, accomplished woman. She is saying the exact same things I attempted to bring to voters’ attention. I look at the photograph of her with her partner and read the mailer and think, “This is someone I wish I could vote for.”

Moreover, I think, this is a woman with courage to put herself out there personally that Progressives should support. Instead, Progressives support ridiculing and deriding her as a liar. Hasn’t the #MeToo movement meant anything?

So many women and men have been labeled as liars, sexually derided in the most perverse and vile terms on the basis of sexual orientation, had businesses threatened, and had their deceased friends and children used in horrific depictions. All to terrorize and silence political opposition.

It’s an open secret that has been publicly exposed so many times. Each time, discarded, while labeling women and victims as liars. When confronted by politicians, they are labeled deceitful partisans. I attempted to shine a light with a $95 voice in a $322,000 race.

I apologize to anyone who misunderstood my message or took offense. Most people understood it, while some twisted it for political ends.

Shame on the local mayors, council members, and Progressive leaders who have abandoned their Bernie Sanders “stand for the people” values in exchange for money, power, forcing board votes, and controlling public comment. They now endorse bigotry, and homophobia. Or, is it possible they have been bullied as well?

Shame on the supervisors if they permit this to continue.

Here’s a partial list of those you continue to victimize by staying silent:

A citizen who was sexually shamed on the basis of sexual orientation and told “he enjoys killing puppies after sex.” He moved out of the county, in large part, due to fear.

A news reporter who has been sexually and mentally degraded in numerous awful communiques, whose deceased daughter was labeled “Rosemary’s baby.”

A businesswoman who lost contracts, blackballed for supporting an election candidate.

A former mayor who received homosexual taunts about his sexual orientation.

A mayor who was impersonated in a fear-inducing telephone message left for a constituent.

A news reporter who received homophobic and hateful derisions and insults.

A local celebrity personality taunted over his divorce, maligned with perverse homophobic sexual accusations, and jeered over a deceased friend.

A city patriarch threatened with physical assault, and whose child was publicly derided.

A mayor whose children were threatened, dissuading her from running for office.

A popular mayor who was threatened with a gun, received a threat comparing her political participation to the KKK and told she was being watched. She was later injured in a car accident just as she was challenging criminal corruption, then told it wasn’t an accident.

A wheelchair-bound disabled woman whose microphone was cut off and was escorted by the sheriff out of a public meeting.

A scientist who lost his job after delivering his scientific opinion at a public meeting, spurring a county supervisor to complain to his boss.

A real estate broker, insidiously shamed over his appearance in a public letter to the editor calling him a “bumpkin with bad breath and worse teeth.”

Another woman shamed over her weight in the same public letter.

A homeless non-profit leader threatened with loss of funding after donating to an opponent.

A state senator who was called racist for attending a political event.

A businessman derided as “fear-mongering” when he inserted his voice into a homeless project.

A citizen with a service dog who was told “we (the Board of Supervisors) should sell your dog.”

FacebookShare to TwitterTwitterShare to EmailEmailShare to MoreMore