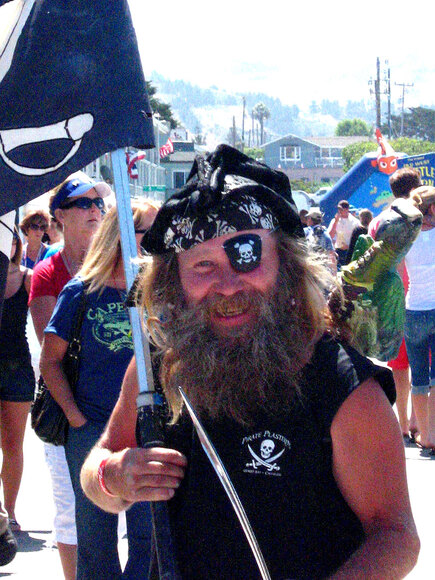 The annual Sea Glass Festival in Cayucos is a very big deal. I don’t know why. When I first moved here in 1989, there was no hint of a sea glass festival and nobody knew what sea glass was, or if such a thing existed. But then all of a sudden you discovered folks wandering around on the beach at a snail’s pace, sometimes in circles, like dogs enthralled with a scent, heads down, searching for supposed sea glass.

Did this glass somehow wash in from the sea along with driftwood and seaweed and shells and rocks, or all the various debris the human race has infected the oceans with? Or did it emerge from deep within the earth, like fossils?

Nobody I’ve talked to wants to discuss those possibilities. But a lot of people became interested in sea glass, and in time, folks came off the beach with little pouches and bags and dog poop sacks of so-called variously colored sea glass, and showed it off to fellow sea glass seekers as if they had discovered gold.

And I guess some of these folks, besides placing sea glass in areas of their homes that added to the beachy ambiance, began creating little ornaments and earrings and necklaces and various jewelry and whatever their creativity led to with recently discovered “Cayucos” sea glass.

Anyway, the obsession with sea glass became bigger and bigger, and the powers that be in Cayucos put together a sea glass festival where people would come with their sea glass creations and sell them at stalls. What started out small is now enormous, to the point that during the sea glass festival, the north parking lot has been transformed into a humongous tent city, with food, music, and local volunteers emblazoned with neon vests to keep order.

The sea glass festival is now so big that advertising and preparations for it start weeks beforehand. The entire north lot is cordoned off, and a long football arena-sized open field across the bridge over Ocean Avenue and back from the beach, leading to Hardy Park, becomes a parking lot where you pay an official Cayucos citizen to park your vehicle—at a price frantic sea glass seekers will gladly pay.

Sea glass seekers come from seemingly everywhere, parking their cars all over on side streets and along the road leading to Highway 1.

Signs are erected on some streets forbidding parking so emergency vehicles have a path out of town during the excitement and mad-house spectacle of the sea glass festival.

Many Cayucans have created their own sea glass items and sell them in their driveways and yards. The town is packed with people eating everything in sight while trying to control their children and dogs. Cayucos is in sea glass chaos.

It is not uncommon on the Friday before the big event to peer down from Schooner’s Wharf and observe the sea glass seekers out in force, bent over and poking around in the sand, bags in hand.

One of the people observing this activity is the bushy-bearded, rosy cheeked, jolly, dust-stained, beer-guzzling, rum-sipping Pirate, Randy Crosier, of whom this author has written about before in CalCoastNews as one of the more colorful, creative and outrageously impish characters remaining in radically gentrifying Cayucos.

He’s a man known among the who’s who in town that count as indispensable in the fight against the invasion of boring millionaires and techie geeks and their high-end stress queens and pampered pedigree mini dogs clothed in sparkling collars and vests.

The pirate takes particular interest in the sea glass festival, though he is not one to attend it. The Pirate enjoys the sea glass festivities from a distance— at Schooner’s Wharf bar, the Pirate’s home away from home, which provides an intimate and bird’s-eye view of the madness taking place on the beach, near the swings and the kiddie play area.

The Pirate anticipates what can only be described as frenetic, near deranged activity in this particular area because, the evening before, he has strategically deployed shards, pebbles and variously sized and colored glass throughout this area, curiously camouflaged below the sand so that just enough glass is visible. And, as the first and second and third discoveries are made, the manic scavenging ensues while the Pirate begins a slow chuckle that increases and continues for some time while he nurses his beer at around late morning or noon.

Where does the Pirate find his precious sea glass? The Dollar Store in Morro Bay. It is there that the Pirate buys variously colored glass items, then pounds them with a hammer, roughs them up and applies some kind of treatment so that those discovering them feel for sure they are ancient sea glass, and certainly worthy of becoming jewelry and, at worse, effulgent additions to the ambiance of a home far from the beach, and perhaps in the Central Valley near rat-holes like Bakersfield and Fresno, where scavengers of this precious sea glass can boast of their discoveries.

Of course, up in the Schooner’s Wharf, where no member of the heralded who’s who pantheon of important Cayucos citizens would lower themselves to partake in the foolish sea glass festival, there are those—like Tag Morely and Jake Straw—who make it a point to adjust their boozing hours to join the Pirate in his ongoing hoot over Bloody Marys as sea glass seekers continue their mad frenzy.