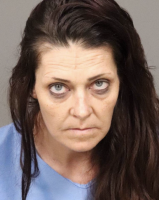 A Paso Robles woman allegedly stole the car of an emergency room patient at Twin Cities Community Hospital in Templeton last week and then got caught with the vehicle at a local Motel 6.

The victim was in the Twin Cities emergency room at about 9:35 a.m. on Friday, when she realized a person who walked past her may have taken the keys to her 2016 Ford Fiesta, according to the CHP. When the victim went outside, she noticed her car was not in the parking lot.

A CHP officer arrived at the hospital and quickly determined the identity of the suspect. The officer contacted local law enforcement agencies and learned the suspect had been staying at Motel 6 in Atascadero.

CHP and Atascadero police officers, as well as SLO County Sheriff’s deputies, located the suspect inside a room at the Motel 6 about an hour after the initial theft report. While searching the room, investigators found the victim’s car keys and personal items that had been inside the vehicle.

Officers arrested Bella Micheline Eliana Saltaerilli, 50, on charges of vehicle theft and possession of stolen property. Saltaerilli was booked into SLO County Jail, where she currently remains with her bail set at $20,000.