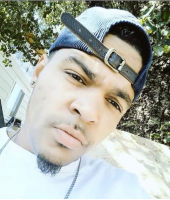 Paso Robles police are searching for a missing man who was last seen early Sunday morning.

Trevon Perry, 27, was last seen in the area of Poppy Lane after leaving a friend’s house. Perry’s friends and family have not managed to contact him since then, and he was reported missing Monday evening.

Police say it appears Perry’s cell phone is now off.

The missing man is described as a light-skinned African American, who is 5 feet 9 inches tall with a medium build. Perry has numerous tattoos on both arms, and he regularly wears a St. Christopher necklace.