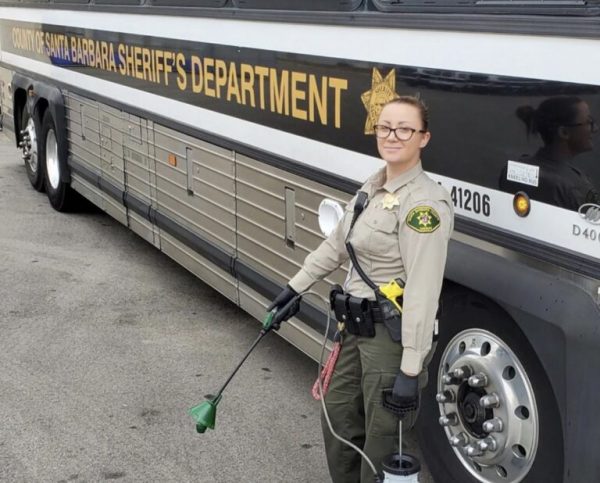 A deputy disinfects a bus used to transport inmates

Positive coronavirus test results from two San Luis Obispo County residents has led to the isolation of more than a dozen government employees in Santa Barbara County, according to a press release.

On March 12, an employee at a Santa Barbara County jail control room fell ill while at work. He later tested positive for the coronavirus and is in quarantine at his home in San Luis Obispo County.

As a result, those who had been in close contact with the infected individual — four sworn custody deputies, one general services employee, two employees of Wellpath Healthcare and five civilian sheriff’s employees — were evaluated by medical staff, found asymptomatic, and sent home to self-isolate.

In an unrelated incident, a public defender who also lives in San Luis Obispo County, Bradley Cornelius, became ill after working in a Santa Maria courtroom last Thursday and later tested positive for the virus. The judge, a court reporter, two court clerks and a sheriff deputy bailiff who had come into contact with the public defender were asked to self-isolate in their homes.

In an abundance of caution, the public defender’s inmate client and another inmate who shared housing with him at the Santa Barbara County Jail were both re-housed into a negative-pressure room, which prevents contaminated air from leaving the room.

County staff then thoroughly cleaned and disinfected the inmates’ previous cell. Both inmates are currently asymptomatic.

“The Santa Barbara County Sheriff’s Office has been diligently monitoring and adhering to local, state, and federal guidance surrounding COVID-19, and is prepared to take appropriate actions to keep our inmate population, staff, and the public safe,” according to a county press release. “All inmate housing areas are being regularly cleaned, and inmates have been instructed on cleaning and disinfecting their housing areas.”