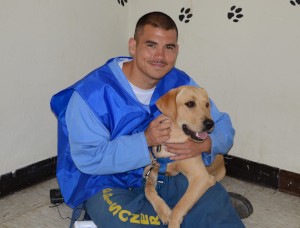 California Gov. Gavin Newsom granted clemency to 26 inmates on Friday, including a Santa Barbara man convicted of murder in 2009.

Kristopher Blehm, 35, has served nearly 12 years in prison for assisting in the murder of his criminal partner’s romantic rival. In 2006, Blehm’s partner shot and killed Kenneth Sosa.

Blehm, who was 22-years-old at the time, was sentenced to 25 years to life for murder.

In his clemency order, Newsom noted that Blehm has a perfect disciplinary record in prison, and has worked to rehabilitate himself. Blehm earned his GED and has participated in multiple rehabilitation programs.

Newsom’s clemency order emphasized that the commutation does not minimize or forgive Blehm’s conduct, but does recognize the work he has done since to transform himself.

More than a dozen of the inmates who received clemency on Friday were convicted of murder or related crimes.

Multiple defense attorneys have asked judges to free thousands of inmates to help prisons better handle the coronavirus, which has already infected one inmate and 12 employees.