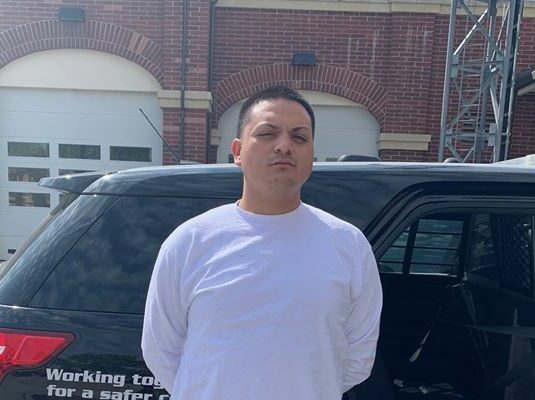 Ricardo Magana cuffed in front of a police vehicle

The Paso Robles Police Department arrested a suspected four-man crew of thieves out of Shafter on Saturday on charges of burglary, possession of a stolen vehicle and evading police.

Shortly after 5 a.m., a homeowner discovered a man had opened his garage door and was attempting to get into the his car. After the resident confronted the suspect, he ran back to a black Ford Edge that was parked in front of the residence.

The alleged intruder and two females who were waiting in the car then fled the scene in what was later determined to be a stolen car. After the trio dumped the car, police found them in the area.

Officers arrested Ricardo Magana, Christina Rogers and a 16-year-old girl. The teen was later released to her parents while Magana and Rogers were booked into the San Luis Obispo County Jail.

Investigators later learned of a fourth suspect, Joel Nunez, whom police located and arrested outside of Walmart in Paso Robles.

“Remember last week when we reminded everyone to lock their cars,” the Paso Robles Police Department posted on Facebook. “Well, apparently, we needed to say it louder for those in the back, because a crew of thieves kept ripping off our neighborhoods.”