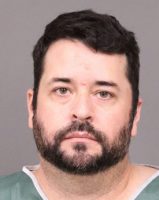 A 39-year-old Las Vegas man allegedly stabbed two of his juvenile relatives during a fight Wednesday evening in Heritage Ranch.

Romen Homero DeLeon entered into a heated argument with a 14-year-old and a 17-year-old in a residence on the 4900 block of Buck Tail Lane. DeLeon allegedly stabbed both of the teens at about 7:30 p.m. and then fled the area.

During the fight, DeLeon was also stabbed, according to the San Luis Obispo County Sheriff’s Office.

Before his arrest, emergency personnel transported DeLeon to a local hospital for treatment.

Upon release from the hospital, officers booked DeLeon into the San Luis Obispo County Jail on charges of attempted murder, assault with a deadly weapon other than a firearm and willful cruelty to a child causing possible injury or death, with his bail set at $500,000.

The victims’ injuries are not believed to be life-threatening.

DeLeon was previously arrested for holding his girlfriend hostage and assaulting her. In 2011, following an argument at a Morro Bay hotel, DeLeon took his girlfriend’s cell phone, restrained her, attacked her and then fled the scene prior to being caught, Morro Bay police said at the time.