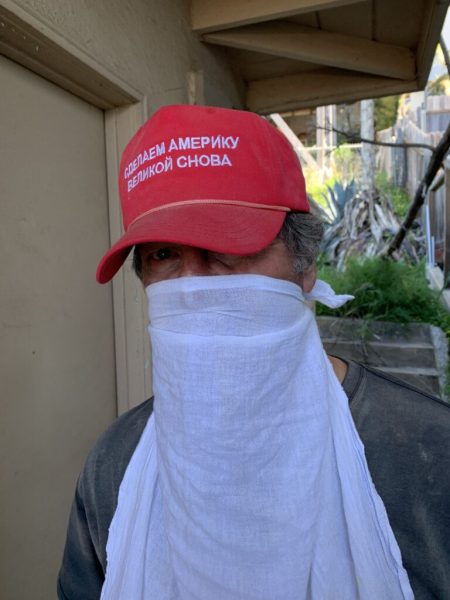 (First of all, much thanks for the critical comments of my last piece in CalCoastNews. It’s more fun to disagree with myself. I’ll take my licks).

I was just about ready to walk my dog in the morning when my next door neighbor popped out and asked how I was fairing against the cornonavirus.

She said she was staying in and getting everything she needed delivered from places like Costco, and she explained some of what she was doing to stay safe in her own home, and asked did I have a mask and sanitizer.

I told her I had a bottle of rubbing alcohol and was going to wrap a dish towel around my mouth and nose when I want to the market on the recommendation of Trump because I couldn’t find a mask to save my life.

She went back into her house—she’s a nurturing mother of three grown children, a dog and two cats—and returned five minutes later with an N95 mask, a bottle of sanitizer, a 100-pack of wipes, an aerosol can of disinfectant, and a bottle of Simple Green, and issued me detailed instructions on how to use them all.

It took a while to get used to the mask, which fogged up my glasses and caused my breathing to sound like I was snorkeling underwater. But it was far better than the dish towel which I’d previously tried on and looked in the mirror at a buffoonish depiction of a western outlaw.

We’re skirting each other warily, as if those we pass in the streets are thinking, “I wonder if that wretch walking his dog has the virus. I wonder if he’s the one who fricking kills me!”

This happens on the beach, too, where once local dog walkers smiled and uttered friendly greetings and stopped to say hello and catch up, and we petted and hugged each others’ dogs and even delivered biscuits.

No more. We’re not wary, like yesterday and before that. We’re scared, and possibly approaching terror.

It’s so bad that an attractive young woman, with a small dog on leash at the little park beside the Sea Shanty restaurant, ignored my “good morning” from at least ten yards away and scurried past. She refused to glance my way as our dogs sniffed along the grass in the direction of the beach.

We old fossils actually have it pretty good as long as we work hard to play it safe and avoid the dreaded bug. We can’t go too far or do too much anyway, and we’re pretty good at roosting on our asses in between solitary exercise. Since I can no longer play hoops with my geezer crew or tennis with a guy I hit with, it’s every day balls out on the exercise bike or on the rusted old rowing machine, but what if I was a young man or even a teenager?

Especially a teenager. I cannot imagine this happening to me my senior year in high school, right in the middle of baseball season when we had a team that ended up going 26-4 and contended for the southern section state championship.

How tough would it have been to be secluded at home and away from my team mates who were my best pals? I haven’t seen much of any teenagers around here. Maybe we just don’t have many. The only ones I’ve seen are hustling into the surf with boards tucked under arms.

Maybe they’re inside. On their computers, texting and tweeting. Trying to complete the school year on line. How do they keep from being angry and frustrated, especially if they’re seniors?

Every one of us should hark back to our senior year in high school, and try and imagine ourselves in this predicament when we spot these teenagers and young college kids doing stupid stuff. It’s the age of rebellion and energy and aspiration and hope.

In some cases, the culmination of a senior year is the best year of your life.

Now you’re home with your parents, the people you really want to get away from — and be with your friends. You won’t really appreciate your parents anyway until you’ve been knocked around and realize what they preached and warned you about is usually true.

It took three years in the army to realize my dad was right about most everything, and I was an idiot 75 percent of the time.

These kids will be tougher for it and grow up quick, if they play it safe. It’s their world.

Advice? If your hands are so dry they’re beginning to crack from too much washing and sanitizing, try and find Corn Husker’s Lotion. I used it back in 1968 when I was a barboy at the Keno Lounge in Harrah’s Club in Lake Tahoe, and I washed glasses almost nonstop for eight hours by hand. A bartender who’d been at it for 30 years gave me the tip.

Later on in the afternoon, as I got out of my car, a local contractor I’ve known for decades who sports a bushy Ernest Hemingway-like beard, stopped his work van and asked how I was doing, and if I was equipped, and ended up handing me a fistful of rubber gloves.

“You can clean ’em after you use ’em,” he said, and drove on. “You need anything else, you let me know.”

The soul of Cayucos.