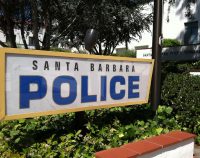 Santa Barbara police detained and ultimately released a man who allegedly spit at people Monday morning amid concerns over the coronavirus. [KCOY]

At about 10:15 a.m., a 911 caller reported a man had spit in the direction of someone, but the saliva did not appear to hit anyone. Officers then located and detained the man near Vons market on Village Coast Road.

Police warned the man to stop spitting before releasing him. Had the situation been more severe, the man could have been arrested for assault, police said.

Last week, the Santa Barbara Police Department announced one of its officers had contracted the coronavirus, the first case among public safety personnel in the city. The police department said two more officers were tested, and the tests came back negative.