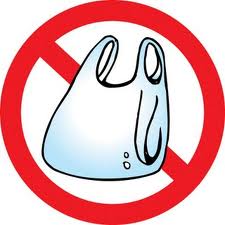 Despite there being bans throughout California on single-use plastic bags, local jurisdictions are now moving to prohibit customers from bringing reusable bags to grocery stores amid fears they could spread the coronavirus. [OC Register]

Since the beginning of the outbreak, at least eight California counties, including San Francisco, have temporarily banned shoppers from bringing reusable bags to grocery stores. Likewise, it appears regulators have stopped enforcing at least one component of the existing bag ban rules.

In 2014, then-Gov. Jerry Brown signed into law a bill that banned major stores from distributing single-use plastic bags in areas of the state that had not already enacted their own prohibitions. A 2016 ballot initiative aimed to overturn the law, but the measure failed.

The existing law also requires stores to charge a minimum of 10 cents for the paper or reusable plastic bags they distribute. Violators of the bag ban rules can face daily fines of $1,000 to $5,000.

Other California supermarkets are allowing customers to bring reusable bags if they bag their own groceries. Likewise, other grocery stores are continuing to charge 10 cents for reusable plastic bags.

In 2016, the California Grocers Association supported the single-use bag ban. However on March 25, the trade group wrote to Gov. Gavin Newsom, asking him to temporarily suspend the single-use plastic bag ban, as well as the required fee for store-supplied bags.

“This is a laudatory environmental policy, but it is simply not appropriate to expect our employees to handle and load customer’s used grocery bags at this time,” the California Grocers Association wrote to Newsom.

Additionally, fears over the coronavirus spreading in supermarkets have rekindled debate over the utility of single-use plastic bags.

The plastic industry is promoting plastic bags as a more sanitary alternative to reusable bags. Environmentalists, though, argue plastic bags should remain banned.

State regulators say they are examining additional protections for grocery stores, including possible measures to mitigate concerns about reusable bags.

Nationwide, plastic bag bans in New York, Massachusetts, New Hampshire and Maine have been suspended or delayed during the coronavirus outbreak, typically by proclamations issued by governors.