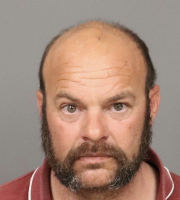 An altercation between two homeless men outside a San Luis Obispo liquor store on Thursday turned into a stabbing, resulting in one man going to the hospital and the other to jail, according to police.

At about 12:30 p.m., the two homeless men began arguing outside the SLO Beverage ’n More at 158 Higuera Street. Brian O’Neal Twyman, 49 pulled a knife and slashed Nathan Ryland, 49, in the stomach.

Twyman then fled the scene. Shortly afterwards, officers tracked Twyman down and booked him into the San Luis Obispo County Jail on a charge of assault with a deadly weapon.

An ambulance transported Ryland to a local hospital for treatment for his injuries.

One Comment about “Man arrested for stabbing outside SLO liquor store”