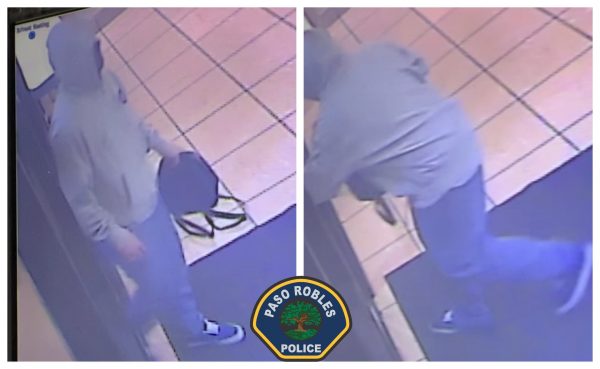 Paso Robles police are searching for a man who robbed the frozen yogurt shop Yogurt Creations at gunpoint Sunday night.

At about 8:15 p.m., a man entered Yogurt Creations with his face covered in a black mask. He approached the cashier, displayed a handgun and demanded money, according to the Paso Robles Police Department.

The employee complied and handed the suspect cash. The robber then said, “Give me your cellphone.”

After the employee gave the robber his phone, the suspect fled. He was last seen heading south.

The cashier locked himself in the store’s bathroom and called 911.

Paso Robles officers arrived at Yogurt Creations and began searching for the robber with help from an Atascadero police K-9. Officers and the K-9 tracked the victim’s cellphone to River Road and S. Riverbank Lane, where the phone was lying in the street.

Officers, however, failed to locate the suspect. Investigators are processing evidence for DNA.

Police describe the robber as a white man who is about 5 feet 7 to 5 feet 8 inches tall, and weighs approximately 200 pounds. He was wearing a gray hooded sweatshirt, dark pants and dark-colored Vans with a white trim. The robber was seen carrying a black backpack.

“Many times we read about such incidents in the paper. They never tell the full story. The sleepless nights for the victim. Crippling anxiety. Loss of work due to emotional trauma. This trauma can last for years. When our suspect is located, inevitably, someone will say, he just took a wrong turn, he’s a good boy. But we must always remain focused on our victim and the relentless pursuit of our suspect. Happy Easter…”