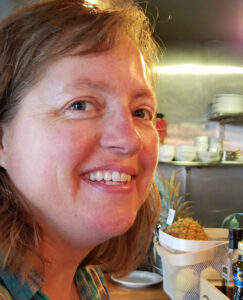 On March 7, my husband Kevin and I were exposed to the coronavirus from a couple we spent some time with, one of whom had a scratchy throat and the other had chills and fatigue the day we were together. My first symptom of tightness in my chest appeared on March 13. My husband’s first symptom was very minor body aches that began on March 11.

Symptoms I experienced and their duration:

On March 16, my friend went to the emergency room and was tested for SARS-CoV-2 (the specific name for this Coronavirus, aka COVID-19). Once my friend received positive results on March 18, I was then contacted by the San Luis Obispo County Public Health Department and identified as someone who had been in contact with a known case of the coronavirus and advised to initiate a self-quarantine for 14 days from my date of exposure.

At this point I was six days into my symptoms, had already been staying at home, and I had very limited contact with people before my symptoms started due to the timing of my onset coinciding with planned time off from work.

I wanted to get tested, but because my temperature was not above 100.4 I was told I did not qualify for a test. My normal body temperature is between 95-96-degrees Fahrenheit, so it must increase by at least four or five degrees before I would be considered for a test under the requirements at the time.

The San Luis Obispo County Public Health Department called every day to check on me for about a week. During each call, we discussed the possibility of a test, and on March 22 both Kevin and I were approved for testing and scheduled an appointment for a test the next day.

The testing process was well organized and quick, although uncomfortable, as the swab is inserted deep into each nasal cavity and twisted around for ten seconds. Twelve hours later I received a call from the county with my positive test result.

For me, the virus went through pretty quick – I felt tightness in my chest the evening of Friday the 13 and by Sunday evening I had been through the worst of it. Although I felt relatively normal on Monday, I opted to stay home from work as I thought I may still be contagious. In retrospect, I still did not know if I had the coronavirus or not, but there was enough information out there that it seemed highly likely I had it and did not want to expose anyone else to whatever it was we had. I stayed home for that entire week – we had planned to take time off from work to attend the SLO Film Festival, lucky for us they turned it into an online film festival!

Due to being tested so far into having had the virus, it was not long after receiving test results that I was removed from quarantine. At the time I was tested, it had been over a week since my worst day of feeling sick, having a fever, cough or any body aches. We alternated between Tylenol and Advil during the worst of the symptoms, drank plenty of water and rested when tired. Because Kevin and I both tested positive and live together, we were considered one unit – so our release date was based on Kevin’s last day of active symptoms which was later than mine.

I personally know four other local residents who tested positive for SARS-CoV-2 and noticed that it truly is different for everyone. The couple who we think we got the virus from are unaware of how they were exposed to it. The other person I know is someone we attended a dinner party with on the first night of Kevin’s symptoms (no one else from the dinner party exhibited symptoms).

The people I know who tested positive are anywhere from seven to 35 years older than I am at 43 years of age and all had more intense symptoms than mine. Some completely lost their appetite, some had a fever up to 102, some had a horrible taste in their mouth, some had extremely painful body aches, and some had no cough at all. Everyone had fatigue and that was also my most intense symptom.

There were also several ups and downs – one day I would feel pretty good, and the next day I would be very tired and have a headache again. Towards the end of the second week, I started to feel normal and the time in between the ups and downs increased until eventually, feeling normal became the norm! I am now able to engage in my normal workout routines, and aside from my breathing being a little more labored than it used to be, I feel great!

Heather Mikelonis and her Kevin moved from Napa to Paso Robles in 2005. They own and operate Pasolumination. Heather Mikelonis works as the operation manager for Baker Wine and Grape Analysis.