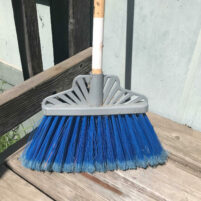 I live in a small cottage yet have two brooms, both of which are in poor shape and rest in opposite corners of the front room and tiny office. The bigger, less beaten up broom sits up front and was donated to me by my female companion over at least a decade ago after she observed the smaller one, which is worn down at the bottom into frayed fringes and twists to the left from years of hard sweeping in one direction.

“You need to throw that old torn up broom out,” she said disgustedly when she issued me the new one. “You only need one broom anyway.”

“It’s easier to use the one in the front room and the other in the office,” I explained.

She saw it unfit to pursue this line of thought, refusing to be drawn into an argument, and left.

These days, since I’m more house-bound than ever, I’m doing more sweeping than ever. I’ve been gouging around in corners, digging out long embedded dirt. I’ve moved my sparse collection of thrift store furniture to get at big clumps of fur. I’ve even stepped outside both office door and front room door to sweep the welcome mats I bought at the dollar store.

Somehow, my place needs sweeping more than ever, possibly because my brown Lab sheds constantly, and there’s these little particles we both drag in from the accompanying deck, and my beach sneakers accumulate sand, and also because I’m the kind of person who unintentionally leaves a mess wherever I go.

Yet, I don’t consider my manic sweeping a sign of desperation or illness at this point. The other day I drove past my neighbor Sheldon, and he was sweeping his driveway. He was talking to our neighbor two houses up, Rex, while sweeping.

I braked, reversed, came even with the two men I’ve known for over 30 years and drank beers with on occasion, and observed Sheldon sweeping, and realized that, when he wasn’t hiding inside his home from the coronavirus, he was piddling in the front, and this piddling seemed to involve an inordinate amount of sweeping.

So, as I sat in my car as it idled, I mentioned to Sheldon that he didn’t seem to be sweeping up much of anything with his push broom, which looked in mint condition.

A retired shrink, Sheldon chose to ignore me, so I said to Rex, “It sure seems like Sheldon’s doing a lot of unnecessary sweeping these days.”

“Come to think of it,” Rex said, scratching his head, “He does seem to be doing a lot of sweeping lately.”

“Hey Sheldon,” I said, craning forward as he swept towards me on his immaculate driveway. “There doesn’t seem to be one tiny particle in front of that broom. Are you practicing your sweeping?”

Sheldon continued to ignore me. Once, when Sheldon and I and three basketball friends took a trip to San Francisco and were playing in a full court game at Moscone Park, Sheldon, while guarding one of the biggest, most dangerous and crazy goons in the city, stared at him in a manner I guess he used on his patients, and the goon started pointing his finger at Sheldon and backing away from him screaming, “Get this sonofabitch away from me! He’s crazy, I ain’t guarding him!”

The goon began throwing up his hands and pacing as Sheldon, who is not a small person, continued staring at him, and so our team mate, Rocco, pushed Sheldon away and volunteered to guard the goon before he totally lost his mind.

Now, Sheldon was gazing at me with the same expression he used on the goon, as I watched him continue to sweep at a steady, deliberate pace.

“Sheldon,” I said. “You think this coronavirus lock-down has some influence on your uptick in obsessive sweeping?”

Sheldon began pushing his state-of-the-art broom downward, as if trying to nudge something up from the pavement, peering down now, all business as he concentrated on his effort, and I thought, “Sheldon isn’t the only local I’ve seen indulging in excessive sweeping, or piddling and tinkering. Almost every old broken down bag of bones in retirement has been out, stooped and moseying around with brooms or rakes or shovels.”

I addressed Rex, who was half faced away from me, hands on hips.  “Rex, how long has Sheldon been sweeping his goddam squeaky clean driveway?” I asked.

“Ever since I got here.”

“That’s a long time to be sweeping a driveway with nothing on it.”

“It kinda is,” Rex agreed, matter-of-fact.

Sheldon continued pushing his broom downward and seemed to have achieved what he was after, and resumed his usual sweeping forward what appeared to be a single pebble, refusing to look up at me.

I felt it was time to go, said my goodbyes and drove down to the post office to mail my census return, and then tooled around town to kill some time. There was nobody out, so I parked over on Studio Drive and watched some surfers and listened to sports talk radio and thought to myself, “If I drive by Sheldon’s and he’s still sweeping, I’m gonna have to get hold of his wife, one of the sanest people in captivity, and recommend he see a shrink.”

Well, I did drive down the cross street below him and peered up, and to his credit, Sheldon was no longer sweeping, and Rex was gone, and I was disappointed.