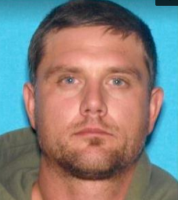 Within 48 hours of letting the suspect flee out the back door of his home, San Luis Obispo police caught and arrested a man who allegedly threatened officers with a knife and Molotov cocktail.

Shortly after 8 p.m. Saturday, residents of an apartment complex in the 1000 block of Foothill Boulevard began reporting their neighbor Bradford Jungers, 35, was yelling and banging on windows. Multiple people said Jungers was acting erratically and attempting to break into their apartments.

Police arrived at the complex and contacted Jungers, who brandished a knife and threatened the officers. Jungers then barricaded himself inside the apartments and threaten officers with a Molotov cocktail, according to police.

The Regional SWAT Team then came out to the location, but Jungers had escaped out of the back door of his apartment before the team arrived. Jungers left behind the Molotov cocktail, but was still believed to be in possession of the knife when he fled.

At about 3 p.m. Monday, a citizen reported seeing Jungers walking in the 200 block of N. Santa Rosa Street. Officers arrived in the area and arrested Jungers without incident.

Officers booked Jungers into the San Luis Obispo County Jail on charges of assault with a deadly weapon on a peace officer, having an outstanding warrant, two counts of felony resisting an officer and one unlisted count. Jungers remains in custody with his bail set at $350,000, according to the county sheriff’s office website.