Approximately a dozen San Luis Obispo and Los Angeles county deputies descended Wednesday morning on the home of Paul Flores, a suspect in the 1996 disappearance of Cal Poly freshman Kristin Smart. Some neighbors watched as investigators searched the property and apparently interviewed Flores.

On a warm Friday night in the spring of 1996, Kristin Smart went to a party at a home near Cal Poly. While several attendees agreed to walk Smart, who had passed out on a lawn near the party, to her dorm room, Flores said he would make sure she got home. Smart was never seen again.

When interviewed by police, Flores, who was sporting a black eye, repeatedly changed his story. At the time, his parents described him as a loner who had trouble making friends. At Cal Poly, students referred to Flores as an obnoxious drunk and weird.

For more than 20 years, investigators have referred to Flores as the primary person of interest in the disappearance of Smart. Earlier this year, officers searched Flores’ San Pedro home for the first time.

At about 7 a.m. on Wednesday, deputies taped off most of the 900 block of Upland Avenue in San Pedro and served a second search warrant at Flores’ home.

Shortly before 8:30 a.m., next-door neighbor Elena Palleschi noticed multiple people in Flores’ backyard, an oddity because Flores rarely, if ever, has any visitors, she said. Sitting about six feet from Flores, a male investigator appeared to be interviewing the suspect while a female investigator searched his yard.

Palleschi described Flores as quiet, paranoid and intelligent. She said he always appears to be aware of his surroundings and suspicious of others.

Generally, Palleschi has no problems with Flores, though his dogs previously tunneled under the fence into her yard, and he accused her of enticing them. Flores also interrogated her about a piece of meat he found in his yard, she said.

“They’re not are going to find anything,” Palleschi said. “He’s too smart.”

For part of the time they were at the home, deputies detained Flores in a black SUV as they conducted their search. After deputies released Flores, he reportedly got into his old model white Chevrolet Impala that was parked in front of the house, and drove away.

The search attracted several Southern California news vans, as well as a helicopter. Some neighbors did not want to discuss the situation with press, and one woman who stopped outside the house said “he ain’t guilty” and “you should leave him alone.”

Other neighbors described Flores as quiet and said he is rarely seen in the company of other people. 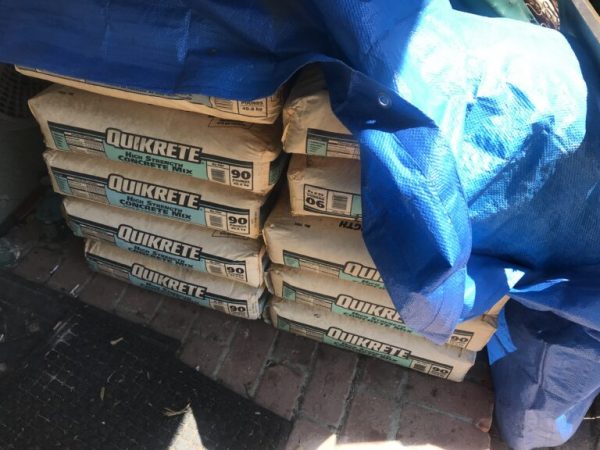 A neighbor who lives across the street noted Flores appears to be stockpiling concrete. Prior to the first raid of his home, Flores began buying sacks of cement mix, he said. The bags of concrete mix are currently stored under a tarp on Flores’s front porch.

The neighbor described Flores as quiet and “really weird.” The man said Flores creeps out his girlfriend, who is a listener of the Your Own Backyard podcast, which provides an investigative look at the Kristin Smart case.