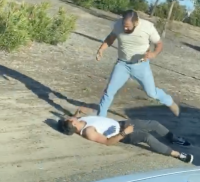 During a road rage incident in Nipomo on Saturday evening, a driver exited his pickup truck and cold-cocked two men who were reportedly harassing his children and him, knocking them both to the ground on a Highway 101 offramp.

Cell phone footage shows the pickup truck driver punching one man, who then falls and lies on the ground. The video has garnered considerable attention on social media, with most commenters sympathizing with the man on the throwing, rather than receiving end of the punches.

While on Highway 101, the driver of a minivan was trying to run the pickup truck off the road, while a passenger threw objects at the truck, witnesses said.

The truck exited the highway at Tefft Street in Nipomo, followed by the van. Two men then got out of the van and reportedly started banging on the truck. Witnesses said the driver of the pickup had children inside the vehicle.

After the man exited his truck, he knocked out the driver and the passenger from the van, possibly needing just a single punch to bring them both to the ground.

Michael Renner posted a video of at least one of the knockouts on Facebook. 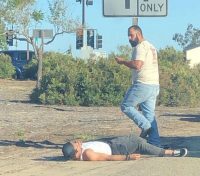 “Just watched two guys get knocked out on the Tefft off ramp in Nipomo. I got out. The two guys were snoring,” Renner stated in a Facebook post.

With the two men from the van lying on the ground, the pickup driver returned to his truck. He then drove off.

Despite appearing disoriented, the men got up, returned the the minivan and drove off, reportedly chasing after the pickup with one of the minivan’s doors still open.

KSBY reports, shortly later, the minivan crashed into a fire hydrant near Southland Street and Princess Court before driving away again.

San Luis Obispo County Sheriff’s deputies tried to stop the minivan driver, but he did not pull over. Eventually, he pulled into a driveway on Widow Lane and then fled by foot.

Deputies tracked down the driver, identified as Ruben Anthony Rangel, 38, of Lompoc, and arrested him on charges of reckless driving and felony evading an officer. His passenger was taken to a hospital for treatment of injuries to his face and head.

The sheriff’s office is still searching for the driver of the pickup who threw the knockout punches.