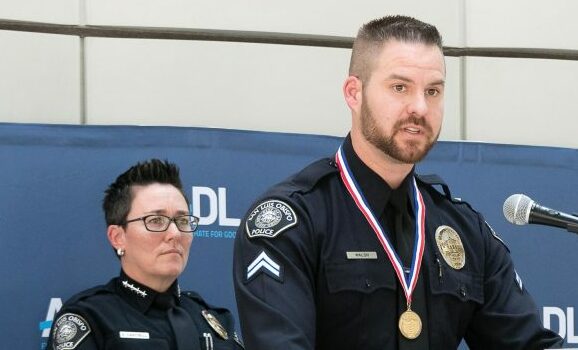 While a source reports Walsh acted inappropriately while on the job, city officials are not divulging the reason for placing Walsh on administrative leave. When asked to confirm the allegation, City Attorney Christine Dietrick initially refused.

“The City cannot comment on details of individual employee leave usage or peace officer personnel matters,” Dietrick wrote in an email. “I can confirm Officer Walsh is currently employed as a Police Officer with the City.”

However, after confronted with requirements to divulge whether or not an employee is on paid administrative leave, Dietrick admitted Walsh was placed on leave on May 6.

Earlier this year, Walsh was on administrative leave regarding a shooting.

In Sept. 2019, Walsh shot and killed a dog while responding to a possible burglary.

Even though Walsh and another officer quickly determined the burglary report was inaccurate, just a resident fixing a broken window, Walsh appeared frightened of the resident’s dog.

Walsh ordered Riley Manford to control her “fucking dog,” Manford said. “I told him he was a friendly dog and asked him to put his gun down so I could get Bubbers.”

While he was removed from duty during an investigation into the shooting, he was later placed back on the street.

Walsh’s time in law enforcement has been marred with allegations of harassment and abuse of power, according to a report written in 2014 by private investigator Mike Brennler, who was hired by several local attorneys concerned with Walsh’s alleged inappropriate behavior.

During his investigation, Brennler interviewed Walsh’s aunt, Rene Knight, who reported her nephew had a history of harassing and “sadistic” behaviors. Knight said Walsh would torment his disabled grandmother, holding her small dog above his head while he pulled the dog’s fur causing it to yelp in pain, according to the report.

Knight also described Walsh’s numerous attempts to become a police officer, which he repeatedly failed because he could not pass the psychiatric exams. Even so, in 2005 Walsh was hired by the Visalia Police Department. A resident of the area later filed a formal complaint of abuse of power and harassment against Walsh.

Since securing a job in San Luis Obispo, multiple suspects have alleged the officer was heavy-handed during their arrests.

In 2016, Brennler presented his report on Walsh to incoming Chief Deanna Cantrell, who appears to have taken no action.