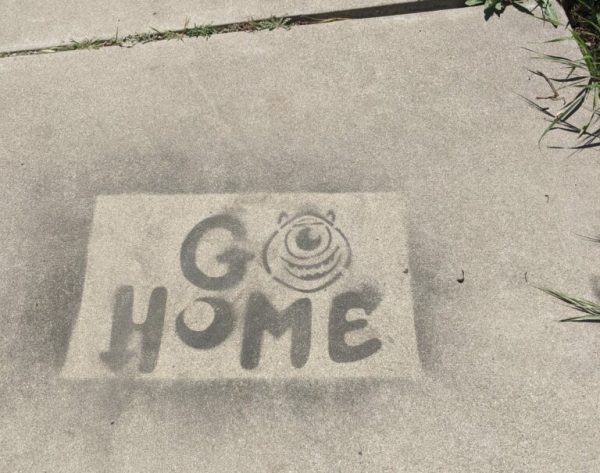 As a long time resident of Cayucos, it was suggested by a cynical friend of mine that I join Nextdoor so as to get to know and ‘connect’ and ‘share’ with local citizens who might give me tips on what to buy from downtown shopkeepers, who to hire as babysitters (I have no kids), what to order at certain restaurants, and to help plan local events, like, possibly, a once goofy, funky, fun and hilarious 4th of July parade that has deteriorated over the years into a goody-goody corporate procession of jingoistic nonsense for vacuous flag-waving slugs from the Central Valley.

Anyway, a less cynical friend of mine, who belongs to Nextdoor and was shocked by their members’ sudden derangement during the coronavirus lock-down in town, showed me a transcript of some of their exchanges over rambunctious behavior and apparent chaos in tiny Cayucos during a warm sunny weekend of marauding tourists who upset their gentle hearts.

Evidently, during this weekend, when graffiti of an ugly GO HOME with a pig inside one of the Os showed up on a beach access walkway, Cayucos was no place for the timid, as certain Nextdoor Cayucans quailed in fear in their mini estates and sent out their comments on the Nextdoor page.

Some commentary arose from as far away as North Morro Bay and an area called Morro Bay Hills (the Real Beverly Hills Housewives?), which is obviously near a golf course and holds heavier sway, hinting at a gated community without gates.

One person was so outraged by the refusal of some to obey our governor and stay home that he snapped a photo of a motel parking lot clogged end to end with cars when it was supposed to be closed.

A woman scolded this photographer for potentially snapping a picture of her, her residence and, most horrifying, her children.

I cannot even bring myself to write about the vehemence with which she threatened this man, who eventually backed down, claiming that although he had the right to photograph whatever and whomever he wanted, he would not photograph her or anyone’s kids, a statement that seemed to calm down the ferociously over-protective mama bear.

Many excoriated the non-mask wearing young and middle-aged tourists rampaging through town like tightly compressed dog packs, the entire motley lot of whom indulged in feeding frenzies (These were not lithe joggers or finicky vegans.), who refused to stand 6 feet apart (a photo of said culprits appeared) while salivating in waiting lines for to-go orders, or raiding the corner liquor store for junk food and, God help us, booze!

Even more ghastly to Nextdoor victims was the mess these insatiable and voracious consumers left when trash cans overflowed and cartons, cups, straws and food wrappers with clinging morsels blew about in the windy streets, and dogs stretched their leashes to dash at the aromas and attempted to gobble the wrappers whole — certainly not good digestion for local pampered pedigrees.

The poor put-upon Nextdoor victims were so traumatized by the throngs of coronavirus-breathing monsters parading up and down their downtown and spreading their swinish shenanigans, that they took to sniping and carping at one another like bratty children, one minute attacking, the next minute making up, obviously ashamed of themselves for stooping so low on a platform created especially for community camaraderie, and not politically-induced red and blue state intolerance and loathing.

The nice individual who slipped me the embarrassing transcript, who has made it a point to overcome all pettiness to get along and go along with the business and tourist sector of Cayucos for going on 30 years, and is generally as pleasant and accommodating and cherished a member of officialdom as there is in town, was nevertheless so appalled by the ugliness taking place in Nextdoor that she felt she had no other choice but place the transcript in my hands in hopes I would, in my reporting, salvage some shred of maturity, humanity and civility. Or at least provide a mirror for fellow members to observe themselves at their very worst.

I, as a Cayucan for over 30 years, and somewhat of an admitted drunk, absurdist/anarchist, ne’er do well, and the farthest thing from a charter member of officialdom, must say that the behavior of Nextdoor (as well as their 5th grade level grammar) shames me and makes me want to apologize to the poor, persecuted and unusually rotund Central Valley marauders trundling and waddling about, yet also spending their money and keeping a few of our small businesses downtown from going broke.