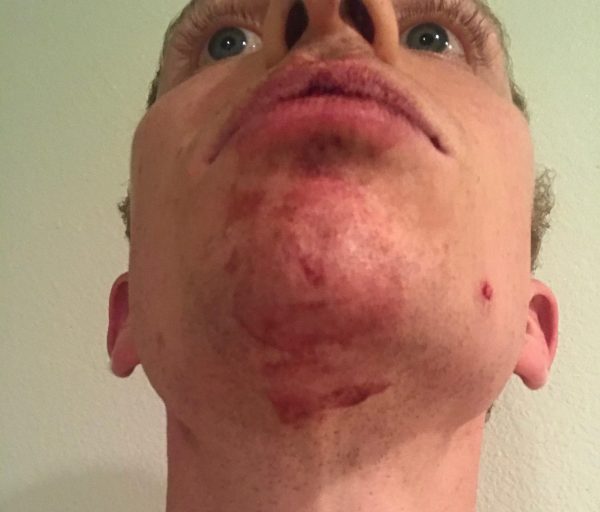 A group of looters assaulted and robbed CalCoastNews reporter Josh Friedman in downtown early Los Angeles Sunday morning as he was reporting on the protests and riots in the LA area following the killing of George Floyd by a Minneapolis police officer.

Shortly after midnight, Friedman was filming looters pillaging a Walgreens near the intersection of Hope and 7th streets near the financial district and live-streaming the action on YouTube. While Friedman walked across the street to film looting at a Rite Aid on the opposite corner, a woman began yelling, “He’s recording all y’all. Get the camera from him.”

A group of young men surrounded Friedman, who was wearing a press pass.

The men ganged up on Friedman, punching him and kicking him. Friedman suffered multiple blows to the face, head and body, leaving him bloodied and bruised. In the end, Friedman had a bloody lip, a cut on the side of his head, and bloody hand.

The attackers stole Friedman’s batters helmet he wore to protect his head from bottle and rubber bullets and two cell phone battery packs he was carrying. They did not steal Friedman’s cell phone, which live-streamed audio of the whole incident.

Friedman says he acknowledges he is taking risks by covering the protests and particularly looting, but there is a great deal of importance to the reporting.

“When there are nationwide protests and riots happening that are impacting the lives of millions of Americans and are the focus of public discourse, it is crucial to have journalists documenting what is occurring — and doing so not just from helicopters and from behind police lines, but on the ground, in the heart of the action,” Friedman said.

During his coverage, Friedman has discovered that large protests attract instigators of violence and looters. The looters break windows, pillage businesses and set fires while protesters occupy the attention of police. The instigators throw objects at police lines, sometimes prompting officers to fire rubber bullets at peaceful protesters, Friedman said.