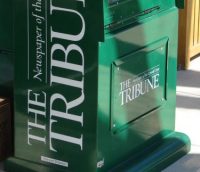 A little more than a year after moving into a downsized office, the San Luis Obispo Tribune is now giving up its new smaller headquarters, as The McClatchy Company has decided to make seven of its newsrooms operate remotely for the remainder of 2020.

McClatchy, which is currently in Chapter 11 bankruptcy proceedings, announced the staff of seven newsrooms, three of which are in California, will work remotely for the rest of the year. In addition to San Luis Obispo, the other six newsrooms are in Modesto, Merced, Miami, Charlotte, Washington, D.C. and Columbia, South Carolina.

A Poynter report states, amid its Chapter 11 reorganization, McClatchy is prioritizing jobs over cubicles.

“The pandemic has accelerated our organization’s need and ability to work remotely,” McClatchy said in a statement to Poynter. “This has led us to look at new ways to find cost savings, including the exit of real estate leases, which our Chapter 11 reorganization allows.”

In April 2019, The Tribune departed its longtime headquarters on South Higuera Street and moved into a suite inside the Edna Valley Office Building by the corner of Tank Farm Road and Broad Street. On Tuesday, in a letter to readers penned by The Tribune’s local editor Joe Tarica, the newspaper announced it will move out of its Tank Farm Road suite in July.

Tribune employees will largely work remotely through the end of 2020, Tarica wrote in the letter. Amid the ongoing pandemic, much of The Tribune’s staff has already been working from home since mid-March.

“We continue to face financial headwinds. In this move, we are investing in people over place,” Tarica stated in the letter.

Tarica said The Tribune will find a new home in San Luis Obispo in 2021, after the commercial real estate industry comes up with new standards and approaches.

An internal note to McClatchy employees stated the company envisions staffers returning to work in an office environment, though one “that complements remote work.”

Poynter’s article, though, raises the question of whether physical newsrooms, like The Tribune’s, might be eliminated permanently and whether staffers will continue working from home after the pandemic concludes.

As a result of McClatchy’s previous nationwide reorganization of its newspapers, The Tribune has an out-of-town publisher, as well as a regional editor based in Sacramento. The Tribune also shifted to being primarily printed in Santa Maria.

In recent days, The Tribune also lost one of its lead reporters, Monica Vaughn, who transferred to The Fresno Bee, another McClatchy publication.

As of Tuesday, McClatchy’s stock price is 14 cents. Earlier this year, it plummeted to less than 10 cents a share. The company’s stock price was once more than $700 a share.