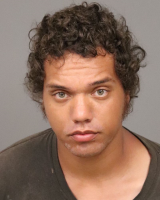 Grover Beach police officers arrested a man who allegedly tried to rob two women inside an ATM kiosk on Tuesday.

At about 4:45 p.m., the man, armed with a knife, attempted to rob two different women while they were trying to use the ATM inside a Bank of America kiosk, according to the Grover Beach Police Department.

Officers found Overduin in possession of a knife and arrested him. Authorities booked Overduin into the San Luis Obispo County Jail on two counts of attempted robbery and two counts of drawing a deadly weapon upon another.

As of Wednesday afternoon, Overduin remains in custody with his bail set at $60,000.