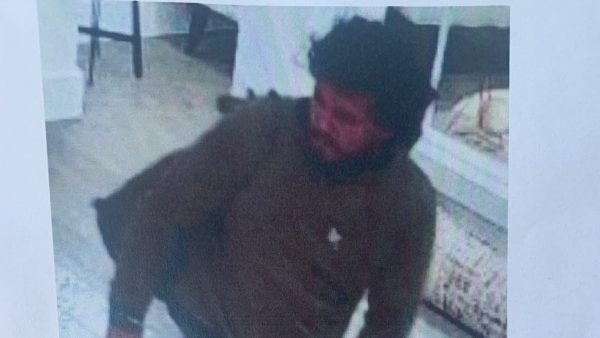 The San Luis Obispo County Sheriff’s Office released a surveillance photo of a man suspected of shooting a sheriff’s deputy in the face and killing another man on Wednesday morning. A manhunt for the suspect is ongoing.

Shortly after 3 a.m., a shooter fired shots at officers near the Paso Robles Police Department. CHP officers and sheriff deputies responded to assist the city.

At 4:19 a.m., the shooter opened fire on two sheriff deputies who arrived at the scene together, shooting one deputy in the face while the other deputy returned fire.

The injured deputy is a two-year-veteran of the department. He was flown to a trauma center in another county in serious but stable condition, Sheriff Ian Parkinson said during a press conference.

Parkinson said the shooting was an “unprovoked attack on law enforcement” by a suspect “laying in ambush” at the police department.

The suspect is also suspected of shooting a 58-year-old man in the back of the head. The victim’s body was found behind Cool Hand Luke’s near the train station where he may have been camping.

The suspect is described as a male, approximately 5 feet 8 inches tall, weighing between 150 and 160 pounds, with dark curly hair and a beard.

Investigators are asking anyone with information about the shooting or the suspect to call the SLO County Sheriff’s Office, Paso Robles Police Department, or Crime Stoppers at (805) 549-STOP.