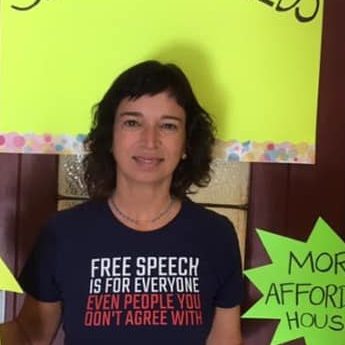 Clarification: Replogle used the wording quoted to her in the story. She said the flag hung on Linda Austin’s property was a sign of white supremacy, and not of racism.

Protests over the death of George Floyd have ignited a battle over freedom of speech and political correctness in Oceano, with one official claiming another had a sign of white supremacy on their property, specificaly a flag supporting the four police officers who were shot last week in Paso Robles.

A few days ago, Oceano Community Services District Board of Directors President Linda Austin hung a blue line flag on a property she owns in the beachside community. A few days earlier, a gunman ambushed the police department in Paso Robles, injuring four officers and killing a homeless man.

On Sunday, Oceano Director Cynthia Replogle said that the blue line flag is a sign of white supremacy, and that it is inappropriate for Austin to fly the flag.

“Whatever meaning the thin blue line flag may have had once, since Charlottesville, it’s a symbol of white supremacy,” Replogle wrote on Facebook. “Now this flag has replaced the American flag at Oceano’s Triangle Park in the center of town. While it may look like a public space, the park is owned by Linda Austin. In a community that’s half Latinx, it’s wholly inappropriate to fly such a flag”

“Are you kidding me. I’m Hispanic, not latinx, which is the most ridiculous new label a$$hats like you are using,” Ñiego posted on Facebook. “I am not white and not affiliated with white supremacy groups and I proudly fly this flag to honor fallen officers. Your stupidity offends me.”

“The fact you think this flag is a sign of racism, proves how ignorant you are.” Streator said. “The fact you’re bullying a constituent, shows how unfit for any public office you are. Your narrow mindedness and bigotry is not okay. Shame on you!”

On Monday morning, Replogle responded claiming that people who supported her opinion on Facebook were attacked. However, only one poster supported Replogle, and received no response.

“To those who posted a comment the haters didn’t like and were attacked for it: I’m sorry you were subjected to that,” Replogle wrote on Facebook. “Everyone should be allowed to express their opinion without fear of ad hominem attacks and intimidating, threatening, misogynistic or racist language. Informed, reasoned debate is welcome.”

Replogle went on to accuse her critics of being proponents of all-terrain vehicle recreation on the Oceano Dunes.

“To those posting hateful comments because you don’t like my stance on the Oceano Dunes SVRA: I won’t back down,” Replogle wrote. “I’m going to keep standing up for what’s right and calling out injustice when I see it. Instead of trying to intimidate people, your time would be better spent cleaning up the trash left in the dunes by off-roaders or removing graffiti unrelated to Black Lives Matter from our beach communities.

“To those crying foul about free speech: Educate yourselves about the First Amendment, as your comments show a clear lack of understanding.”