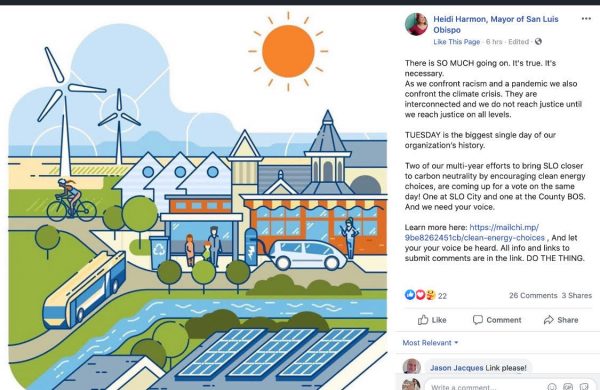 San Luis Obispo Mayor Heidi Harmon has come under fire from the California Black Chamber of Commerce for attempting to link racism to global warming.

Harmon, who has been a primary proponent of an ordinance supporting all electric building, asked members of the public to support the ordinance in a June 15 Facebook post. In order to battle racism and the pandemic, the community needs to support her clean energy proposal, Harmon wrote.

“As we confront racism and the pandemic, we also confront climate change,” Harmon wrote. “They are interconnected and we do not reach justice until we reach justice on all levels.”

Shortly afterwards, the California Black Chamber of Commerce sent Harmon a letter accusing her of attempting to use the Black Lives Matter movement to promote her political agenda. The letter ends with a request for an apology from Harmon.

“We are stunned and angry about your online post this morning where you in effect make climate change a condition for racial justice in America!” the letter says. “It is clear why. You put a building code ordinance on the agenda tomorrow, one that you have an obvious political interest in passing. Perhaps your reelection in November has shorted-out your judgement.”

“You have combined the moral cry for justice Black Lives Matter with a ban on natural gas as interconnected with racial justice. How dare you?”

“This is a cheap political trick that betrays your values and sensitivities as mayor of the City of San Luis Obispo. And will not go unchallenged.”

The chamber letter then chastises the SLO City Council for holding the meeting at 3 p.m., in a city building that the public is not permitted to attend because of the pandemic.

Jay King, the president of the California Black Chamber of Commerce, said he was concerned that the wording of the letter was harsher than he had wanted, but that he agrees with the concerns listed.

“I stand firm in that they need to stand down,” King said. “You can’t conflate climate change with racial disparity. We trust our public officials will not play politics.” 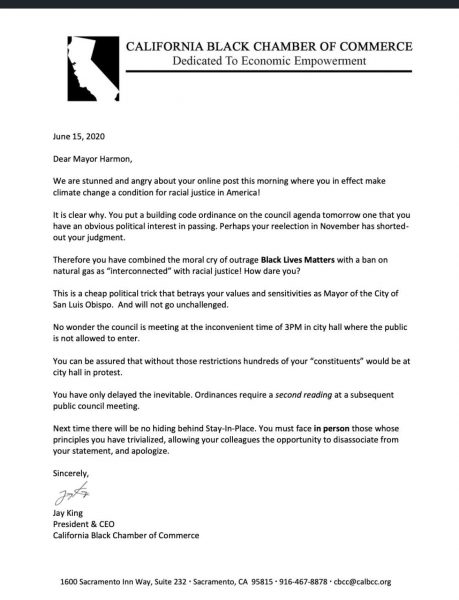