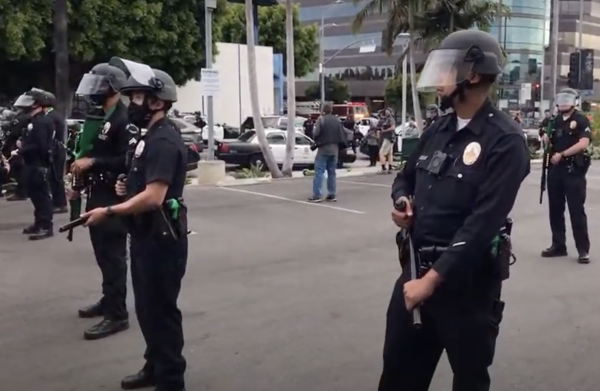 LAPD officers in riot gear amid a standoff with protesters in Los Angeles. Photo by Josh Friedman

Three California police unions ran full-page advertisements on Sunday in major newspapers in the Golden State, as well as the Washington Post, calling for a nationwide set of policing reforms.

“No words can convey our collective disgust and sorrow for the murder of George Floyd. We have an obligation as a profession and as human beings to express our sorrow by taking action,” the advertisements state.

All three of the police unions are calling for a national use-of-force standard that emphasizes deescalation, proportional response and accountability provisions, which would be mirrored after the Los Angeles Police Department’s existing policies.

Likewise, the Los Angeles, San Francisco and San Jose police unions are calling for a national database of ex-police officers who were fired for gross misconduct, which would prevent other agencies from hiring them.

Additionally, the police unions are proposing an early warning system to identify officers who may need more training and mentoring, which would be modeled after a San Francisco Police Department system, as well as mandating a publicly accessible use-of-force analysis website similar to one the San Jose Police Department has.

Furthermore, the unions’ proposals call for frequent training of police officers to build and refresh their skills to improve community outcomes, in similar fashion to what is outlined in California’s use of deadly force law, SB 230.