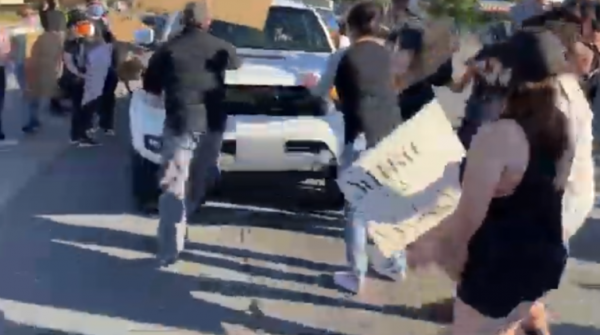 Ventura County prosecutors announced Friday they will not prosecute a man who slowly plowed through a group of Black Lives Matter protesters who where blocking the street, injuring at least one protester, according to the Ventura County District Attorney’s Office.

On June 7, a group of people gathered at the intersection of Victoria Avenue and Telephone Road in the city of Ventura for a planned protest. Multiple protesters than moved onto Victoria Avenue to block traffic.

The motorist motioned with this hand for the protesters to move away, but they surrounded his vehicle and began yelling and pounding on his truck, according to prosecutors.

As the motorist drove forward, a man in front of the truck was knocked to the ground. Another protester was struck in the foot, breaking her ankle, as she attempted to get out of the way.

“Video footage of the incident revealed the motorist was lawfully operating his pick-up on the roadway when he encountered protesters in the roadway, who were in violation of the California Vehicle Code,” according to prosecutors. “Based on these facts, there is insufficient evidence to establish that the collision was the result of an intentional assault.”