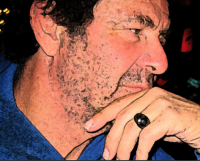 I was walking Wilbur around 7:30 in the morning and approached a lot where a rugged looking man around 40 on a growling backhoe loader was carving out dirt for future construction of a house, when another rugged looking man around 40 pulled up in a huge pickup truck and got out and shook hands with the man who had gotten off his machine, and said, “How you doing during this coronavirus bullshit? What a joke, huh? Goddam stupid masks.”

I don’t know what the other man said, but they were immediately into some serious grousing. Wilbur and I moved on by, but their tone of voice and attitude was obvious—“Real Americans believe this coronavirus is bullshit, and Governor Newsom’s policies are dictatorial, and the pussy dems started all this crap and taking away our economy. And freedom means nobody’s telling me to wear a goddam mask!”

Am I supposed to feel like a sissy boy because I wear a mask when I enter any store? Two of the biggest, toughest bruisers I know in town—one a former All American water polo player and college coach; and a college basketball player who controlled rebounds like an enforcer—wear masks when they hang out mornings down on the seawall drinking their coffee. Pete and Nick.

But I guess they’re not real men, and are possibly looked upon by the real men who don’t wear masks as scaredy cats. Maybe the real men take their cues from President Trump, a real man who had bad feet during Vietnam and refuses to wear a mask because he feels it emasculates him in front of his ardent admirers who see him as a symbol of tough guy American masculinity.

Or maybe a mask looks buffoonish, contrasting with Trump’s power ties and immaculate suits and fluffed up hair and man-tan.

The other day I ran into long-established businesswoman Audrey, and brought up this subject. She said she wore a mask into the post office and a local maskless lady in real estate whom she’s known for decades and has always been on good terms with, cast her a filthy look when spotting her, and stomped out without returning her friendly greeting.

I guess Audrey’s  a, well, I can’t all her a ….., but, maybe Audrey, who has always showed me a lot of spine and spirit, is, well, weak, a frightened, obsequious follower of Governor Newsom’s dictatorial decrees.

Shame on you, Audrey! Better take off that mask in Cayucos if you don’t want to gain a reputation as a weak-sister, a bleeding heart lib, a person on the wrong side of freedom.

But I guess little microscopic Cayucos is just like the rest of the country—torn between wearing and not wearing masks to show everybody where they stand politically.

I am not an example of ignoring this kind of nonsense. The other day in Spencer’s Market a maskless guy called to me in a very friendly manner by name and came charging over with the offering of a handshake, and I stopped him cold with a poisonous stare. I said nothing, held the stare, and he turned and walked off and probably hates me. And at first I felt self-righteously justified about what I did, but, later, I chastised myself for being just another politically demented asshole and felt miserable about what I’d done.

I should have offered a bumping fist. That’s what I usually do out in the open air, where I never wear a mask, but never walk downtown or along the seawall during the day because this area is teeming with maskless groups, mostly young and under 60, some waiting in long, long lines at eateries, taking over.

I suppose we should just allow the maskless young and healthy hordes to forge on, buying and selling and eating and schlepping and intermingling as close as they can be to each other, while us old fossils are reduced to creeping along the fringes. It is our duty as geriatrics to become mostly masked outsiders, and presumably weak. And we are weak—physically.

But, mentally, emotionally, we are still children of survivors of the Great Depression, and we’ve heard about our huge families not having enough to eat, wearing hand me downs (seven kids in my mother’s family) and no help from a government and country stripped of everything for over a decade.

If we have to go a year living the way we have for four months, or even longer, we’ll suck it up and deal with it, while those much younger than us can try and stay healthy in the work places and play places while the pandemic surges all around them.

5 Comments about “Real men in Cayucos do not wear masks”