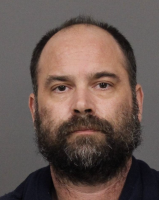 The criminal case against a man who crashed his truck into a Cambria bakery, injuring five customers, has been dismissed following the submission of evidence that the defendant had been experiencing a medical emergency at the time of the collision. [Tribune]

Jermey Ian Preston, 43, had been facing charges of reckless driving causing injury and DUI causing injury, both of which were felonies. He also faced potential enhancements to those charges.

In Feb. 2017,  Preston was driving his Chevrolet truck on Main Street when he ran a stop sign at Burton Drive and hit a parked truck. Preston continued driving and then crashed into a parked Mercedes propelling both his truck and the Mercedes into The French Corner Bakery.

Inside the bakery, one customer suffered major injuries while four other customers sustained minor injuries. Preston suffered a broken foot, and officers arrested Preston for driving under the influence.

On Tuesday, a SLO County prosecutor submitted a motion to dismiss all charges in the case. Judge Jess Marino granted the motion, and the case was dismissed.

Preston’s attorney, Ilan Funke-Bilu, said his client was not driving impaired, but rather suffered a medical emergency prior to the crash. Funke-Bilu said Preston has suffered from a serious medical condition.

A CHP officer testified that, following the crash, he interviewed a dazed Preston, who said he had taken a sleep aid, anti-seizure medication and an anti-depressant just prior to the collision. The officer also testified Preston told him he had two other black-out episodes while driving, which occurred shortly before the bakery collision.

In Nov. 2018, Preston was arrested for assaulting his then-9-year-old daughter in Cambria. The girl’s mother said Preston was heavily intoxicated earlier in the day when he got into an argument with his daughter.

Preston allegedly picked up a sweatshirt and swung it a the girl’s head three to five times. The zipper on the sweatshirt injured the girl and caused her head to bleed profusely.

San Luis Obispo County deputies found Preston at his home and arrested him for inflicting corporal injury upon a child.