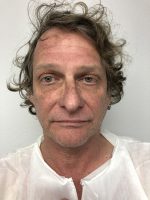 A Morro Bay man, who had been facing a first-degree murder charge for stabbing to death a friend of his earlier this year, accepted a plea deal that will send him to prison for six or seven years on a manslaughter conviction. [Tribune]

On Jan. 25, Sean Maneely, 53, and  Andrew McTaggart, 58, began arguing loudly at a Morro Bay storage unit in the 1100 block of Allesandro Street. A physical fight ensued, and Maneely stabbed McTaggart in the chest.

McTaggart later died of his injuries.

Police officers arrested Maneely, and San Luis Obispo County prosecutors charged him with a single count of murder. Maneely initially pleaded not guilty and was scheduled to stand trial this week.

But last week, Maneely pleaded no contest to felony manslaughter, as well as to an enhancement for using a knife.

At an upcoming sentencing hearing, the defense and prosecution will argue whether or not a judge should strike the one-year sentencing enhancement Maneely faces.

Had Maneely stood trial and been convicted of first-degree murder, he would have faced 25 years to life in prison.

Maneely’s attorney, Ilan Funke-Bilu, said the killing was an unfortunate incident involving two friends. His client was inside his storage unit playing music when he was approached by McTaggart and an altercation ensued, Funke-Bilu said of the incident.

The defense attorney also said McTaggart had past incidents of violence, which Funke-Bilu intended to present had the case gone to trial.

Maneely’s sentencing is scheduled for July 30. Maneely is currently being held in the SLO County Jail with no bail.