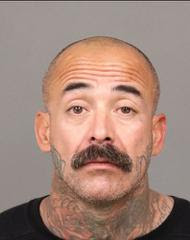 Arroyo Grande police arrested a man on Wednesday who is accused of stabbing a man multiple times in the chest, leaving the victim in critical condition.

Shortly before 11 p.m. on Jan. 20, the suspect allegedly entered a home at 425 S. Elm Street, stabbed a man inside the home and then fled the scene, according to police. Officers arrived and found the victim suffering from life-threatening stab wounds.

Officers provided emergency medical care to the victim who was ultimately transported to a local hospital and survived his injuries.

On Wednesday, officers arrested Michael Angel Galindo, 43, and booked him into the San Luis Obispo County Jail on a charge of assault with a deadly weapon resulting in great bodily injury and for a parole violation. His bail is set at $75,000.