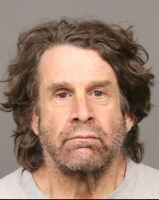 Following an approximately nine-month-long string of shootings near Elks Lane in San Luis Obispo, officers arrested a felon on Wednesday, who is accused of possessing an AR-15 rifle and of shooting at a motorhome, an occupied residence and a water line.

Between Oct. 2019 and March 2020, San Luis Obispo police received eight reports of gunfire or fireworks in the 200 and 300 blocks of Elks Lane, police said.

After one of the incidents, investigators found multiple bullet holes in the side of a motorhome. The motorhome was in long-term storage at the time, and it was not occupied.

Then on March 19, a gunman fired a single shot into an occupied home in the 300 block of Elks Lane. Officers searched the home and nearby creek area, but failed to find a suspect.

Between March 19 and Wednesday, police received an additional seven reports of shots fired or fireworks in the area. On one occasion, investigators determined a single gunshot had been fired into a large water pipe.

Since the March shooting, investigators conducted regular searches of the creek and surrounding areas.

During a search conducted Wednesday, officers interviewed Guy Wicks, 59, in the creek off Elks Lane. Officers found evidence linking Wicks to an AR-15 rifle that was hidden in the area.

Additionally, investigators found evidence leading them to believe Wicks is responsible for shooting into the vacant motorhome, occupied residence and water line.

Investigators are continuing to search for additional evidence related to the motorhome, residential and water line shootings. Police are asking anyone who has information about the case to call Detective Benson at (805) 594-8059.