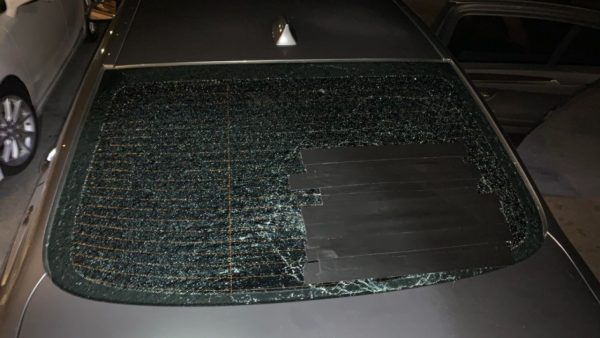 California Highway Patrol officers are seeking the public’s help identifying the Black Lives Matter protesters who damaged a car with a 4-year-old child inside on Highway 101 in San Luis Obispo, according to the CHP.

Shortly after 5 p.m. on Tuesday, approximately 300 protesters marched onto Highway 101, blocking all lanes in both directions for nearly an hour. A driver then drew the ire of the protesters when they attempted to drive away.

“While traffic was stopped, a group of protestors became violent and circled a motorist who was attempting to drive around the protestors,” according to a CHP Facebook post. “One suspect jumped on the hood of the victim’s vehicle and an additional suspect broke the rear window out of the vehicle with a skateboard as the vehicle was leaving the area.

“The shattered glass showered down on a four year old boy who was secured in his child safety seat. In fear for their safety, the driver was able to elude the combative protestors,” the CHP added.

Investigators are asking anyone with information about the incident to contact the CHP at (805) 594-8700 or through social media.

In defense of the protesters, San Luis Obispo resident James Dugger admits he was not at the protest, but that protesters he trusts blame the boy’s parent for what they have deemed road rage.

“The car in question ran over a protestor on a skateboard, which flew back and hit the back windshield,” Duggar posted on Facebook. “The child wasn’t harmed at all. If anything, the driver put them in danger by having road rage and trying to run over another human being.”