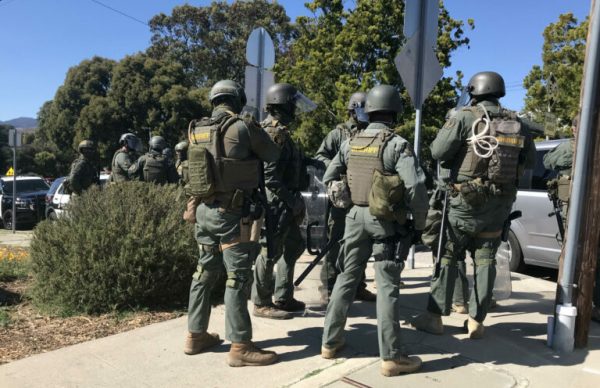 Supporters of Black Lives Matter protested peacefully and lawfully on Wednesday afternoon following a disruptive protest that led to the arrest of two protesters on Tuesday.

In sharp contrast to earlier protests, on Wednesday, approximately 300 protesters marched along the sidewalk, stopped at stop signs, and did not attempt to stop the movements of others. Even so, dozens of officers from multiple law enforcement agencies gathered throughout the area, primarily protecting highway onramps and offramps. 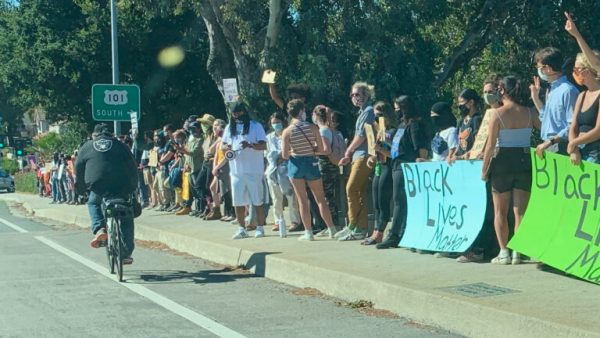 San Luis Obispo paid more than $250,000, primarily in police overtime, for the five protests that occurred from May 31 through June 5, according to a records request. 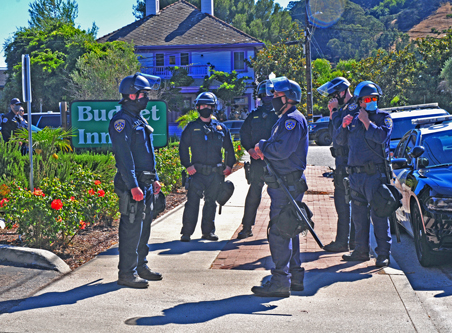 The BLM group is planning another protest for Thursday at 4 p.m. at the courthouse. The group has regularly attempted to disrupt Cruise Night, because of the number of white men that participate in the event, according to several protesters.

At the end of Tuesday’s protest, officers arrested BLM organizer Tianna Arata, 20, on charges of participation in a riot, unlawful assembly, conspiracy, unlawful imprisonment and resisting arrest. She was released about 1 a.m. on her own recognizance.

Tianna Arata with Mayor Heidi Harmon and two others

During Arata’s arrest, 22-year-old Elias Bautista yelled at an officer before kicking him in the crotch. Officers booked Bautista in the San Luis Obispo County Jail on charges of attempting to deter an officer from doing his job, and for attempting to take a person from the lawful custody of a peace officer.

DSA SLO, a “group of socialists, communists, and anarchists looking to upend capital and build working class power,” raised funds to pay Bautista’s $50,000 bail, according to their Facebook page. The local organization is associated with SLO Mayor Heidi Harmon.