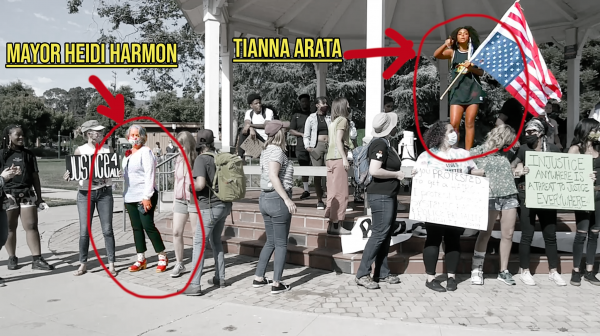 The video shows a man and a woman pleading with Black Lives Matter protesters who had blocked Highway 101 in San Luis Obispo, to let them take a pregnant woman in labor to a hospital.

“She is going to give birth,” the woman tells protesters. “Get out of the road.”

This and other videos given to CalCoastNews provide a record of what occurred at the July 21 protest.

After congregating at Mitchell Park, approximately 300 protesters walked onto Highway 101 from both Osos Street and California Boulevard, blocking all lanes in both directions for nearly an hour. While on the highway, protesters ran after vehicles attempting to drive off the freeway, blocked vehicles, and yelled at some of the drivers, according to videos of the protest.

While protesters blocked the highway, several local nurses posted on Facebook that protesters were blocking traffic during shift changes at area hospitals. Chadwick Payne, a critical care nurse at Marian Regional Medical Center in Santa Maria, asked the protesters to screen cars to make sure people “needed at the hospital to take care of super sick people,” could get to work, Payne wrote.

“I’m on my way to work, and they better get off (the highway) because my hospital is short staffed,” nurse Sandra Boc responded to Payne’s Facebook post.

A man in a white truck attempted to get around the protesters by driving on the shoulder of the highway, but his path was blocked. A woman in the passenger seat told protesters that a pregnant woman in the back seat was “going to give birth,” and told them to let the truck through.

Tianna Isis Arata, the organizer of the protest who moved from Portland to San Luis Obispo several years ago, and another protester discussed whether the woman’s water had broken and if she was really in labor, according to the video.

“It’s not worth it, she’s ignorant,” Arata said before marching away chanting, “Black lives matter.”

After the Highway 101 blockade, the protesters marched back into the city. Arata then directed others to stop vehicles, and, wielding an American flag on a pole, she chased several cars. A drone video shows Arata hitting one of the cars with the flag pole.

During the march, several drivers bumped protesters out of the way who were blocking their paths. In one incident, a protester threw a skateboard at the back window of a car that had hit a protester. The window shattered, with the pieces landing on a 4-year-old boy, who was unharmed.

Following the protest, San Luis Obispo police officers arrested Arata, 20, on charges of participation in a riot, unlawful assembly, conspiracy, unlawful imprisonment and resisting arrest. She was released shortly afterwards on her own recognizance.

During Arata’s arrest, 22-year-old Elias Bautista yelled at an officer before kicking him in the crotch, according to videos of Arata’s arrest. Officers booked Bautista in the San Luis Obispo County Jail on charges of attempting to deter an officer from doing his job, and for attempting to take a person from the lawful custody of a peace officer.

SLO Mayor Heidi Harmon, who has repeatedly asked the public to support Arata and Black Lives Matter, joined in the protest, but left to attend a city council meeting before the group entered the highway.

SLO Democratic Socialists of America, a “group of socialists, communists, and anarchists looking to upend capital and build working class power,” raised funds to pay Bautista’s $50,000 bail, according to their Facebook page. The local organization has ties with Harmon, including having her speak at meetings and promoting her reelection.

On social media, protesters are demanding prosecutors charge two motorists with assault with a deadly weapon, and that they drop all charges against Arata and Bautista.

During the four days that followed Arata and Bautista’s arrests, local Black Lives Matter protesters have peacefully marched in downtown SLO, staying on sidewalks, stopping at stop signs and not confronting motorists.

However, protesters tried to stop a CalCoastNews reporter from filming the demonstration, despite being in public. Likewise, protesters followed the reporter as he filmed; demanded he film in locations of their choosing; and ordered other protesters not to speak to him or even acknowledge him.

Following her arrest, Arata took down her Instagram page, and has not attended the past four protests.