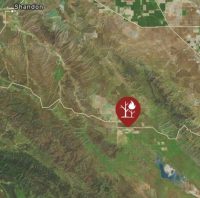 A fire broke out near Highway 58 in the California Valley Tuesday afternoon and burned more than 2,500 acres, prompting authorities to conduct evacuations.

A 911 caller reported the blaze burning by Highway 58 and Soda Lake Road shortly after 2 p.m. It has burned between 2,500 and 3,000 acres, as of early evening, according to Cal Fire.

Fire officials say the blaze is threatening both structures and power lines.

Authorities have set up an evacuation center at the California Valley Community Services District. Officials have also closed Highway 58 in the area of the blaze.

Fire officials have yet to disclose a level of containment for the fire.