“Hey hey, ho ho. Ian Parkinson’s got to go,” protesters chanted while lined up on Monterey Street across from Giuseppe’s, as well as Finney’s restaurant and other downtown businesses. Other chants included “black lives matter” and “out of the shops and into the streets.”

Protesters made use of at least one bullhorn while standing in a line on the sidewalk and chanting. The protesters could be heard loudly from where people were eating and drinking in the new coronavirus-driven outdoor dining setup on Monterey Street.

Local Black Lives Matter activists have taken aim at Parkinson over recent comments he has made, including a statement that he does not believe systemic racism exists in SLO County. In March 2018, while running for reelection, Parkinson received a $3,384 campaign contribution from Giuseppe’s Italian Restaurant.

Support for the protesters is waning, as people question their lack of support for the civil rights of others. Protest organizers have accused business owners who boarded up their businesses or who have supported those with differing views of being racists.

A regular supporter of peaceful protests, KVEC radio host Dave Congalton questioned the protesters’ rationale for targeting a business because the owner donated to Parkinson two years before the sheriff’s alleged contentious comment.

“100 to 150 protestors lined up this afternoon across from Giuseppe’s, singling out my favorite downtown restaurant because Joe donated to Sheriff Parkinson’s campaign, Congalton posted on Facebook. “Note to protestors: Joe DiFronzo has done more for this community in the last 30 years than all of you combined. You get to protest. He gets to donate to campaigns. Freedom of Speech and Freedom of Expression come in many forms!”

Previously, protesters marched by people dining outdoors on Monterey Street during the July 21 protest that culminated with two arrests. Led by Tianna Arata, who was one of the individuals arrested, protesters chanted “f**k your comfort” while marching next to and through the outdoor dining area where people were seated. 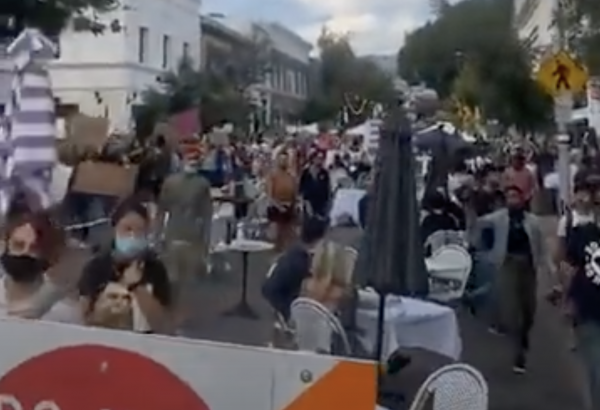