While marching through downtown and beside restaurants and businesses, protesters chanted, “Hey you, Dan Dow. Drop the charges right now.” Demonstrators also chanted, “Drop all charges.”

Demonstrators defended Arata, saying she is a courageous black woman whom police targeted for being a protest leader.

Wednesday’s protest began and ended at Emerson Park on Nipomo Street. Protesters marched from the park to the downtown core, making multiple loops and stopping in the street for speeches prior to returning to the park, where more speeches were given. 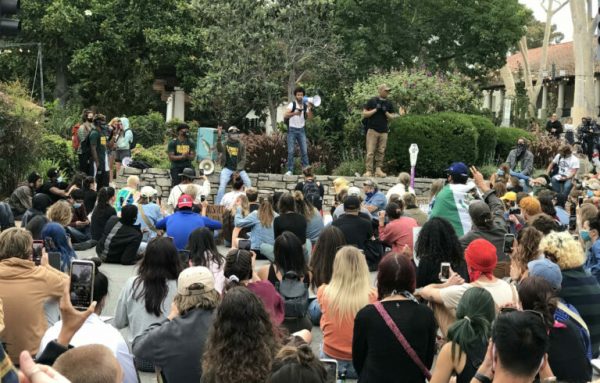 Early in the demonstration, protesters stopped outside the San Luis Obispo Mission and Giuseppe’s Italian restaurant, occupying the intersection of Monterey and Chorro streets. Protesters have recently targeted Giuseppe’s over a contribution the restaurant made to SLO County Sheriff Ian Parkinson’s 2018 reelection campaign.

Protesters also marched and chanted by people dining outdoors on other downtown streets.

While at Emerson Park toward the end of the protest, one protester instructed other demonstrators to take out their phones and post photos underneath an allegedly misleading California Highway Patrol Facebook post.

The CHP announced Wednesday that Highway 101 on and off-ramps would be closed between California Boulevard and Marsh Street because of the protest. In the post, the CHP included a photo of a prior demonstration, prompting protesters to leave dozens or possibly hundreds of comments accusing the CHP of misrepresenting Wednesday’s demonstration.

Additionally, while speeches were being delivered at Emerson Park, one protester called for boycotting San Luis Obispo businesses that do not support Black Lives Matter, even suggesting, “We need to shut them down.” CalCoastNews will soon report more on attempts by some Black Lives Matter protesters to harm local businesses that do not show support for the demonstrations.