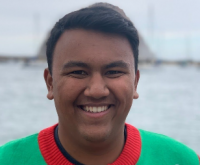 Milan Chaudhary allegedly filmed both minors and adults in bathrooms in various locations in the Bay Area and Lake Tahoe, as well as in the dorms at Cal Poly and at an off-campus home in San Luis Obispo. Chaudhary then sold images he captured of child pornography, investigators said.

Deputies believe there are a total of 24 victims in the case. All of the incidents involving minors occurred outside of SLO County.

Chaudhary allegedly began filming people in bathrooms prior to moving to San Luis Obispo. The videos taken in SLO County are believed to have been recorded during a one-year period from Feb. 2019 to Feb. 2020.

After receiving a cyber tip, the Sheriff’s Sexual Assault Felony Enforcement (SAFE) Team and Internet Crimes Against Children (ICAC) Unit conducted an investigation. Investigators determined the camera system would record unsuspecting women and some men while showering or going to the bathroom.

On Feb. 20, investigators served a search warrant at the home Chaudhary was renting in SLO. Working with Cal Poly detectives, sheriff’s investigators seized a phone and computers that contained images of child pornography.

Investigators later determined Chaudhary was taking still images of the video he had recorded and then distributing the shots over the internet.

Chaudhary posted $600,000 bail and was released from custody.

Anyone who may have been a victim and has not been contacted by law enforcement is asked to contact detectives with the Sheriff’s Major Crimes Unit at (805) 781-4500.