Editors Note: An Instagram demand from Tianna Arata’s mother Michelle Arata to businesses, an interview with SLO Mayor Heidi Harmon, a video of a protester discussing shutting down businesses and a letter that accompanied a payment are at the end of this article.

A group of protesters affiliated with Mayor Heidi Harmon organized Black Lives Matter demonstrations in San Luis Obispo and demanded that downtown businesses pay reparations for boarding up their windows after local activists took to the streets.

Some businesses have paid, writing checks to R.A.C.E. Matters SLO. Others which refused were called racist and demeaned on social media.

The demands for money are made in writing and through personal visits from locals claiming ties to Black Lives Matter. The protesters direct the businesses to either pay R.A.C.E. Matters SLO, which is not a federally recognized charity and uses a post office box as its address, or to the Black Lives Matter Foundation, a 501C3 entity which has one paid employee, and lists a UPS store as its address.

Following the May 25 death of George Floyd, Harmon met with a group of young African Americans, including Tianna Arata and Cal Poly quarterback Jalen Hamler.

Then on June 1, Arata and Hamler participated in a march that turned violent, with protesters throwing rocks and water bottles at officers. SLO police then used pepper spray and tear gas to dispel protesters. Later in the evening, several local businesses were vandalized by a group of teens.

While Harmon and her former campaign manager Quinn Brady posted requests for the community to join in upcoming protests, local police officers warned businesses of the possibility of protester violence.

Many local businesses responded by boarding up their windows. Meanwhile, Harmon and Councilwoman Andy Pease attended the protests, which occurred almost daily. 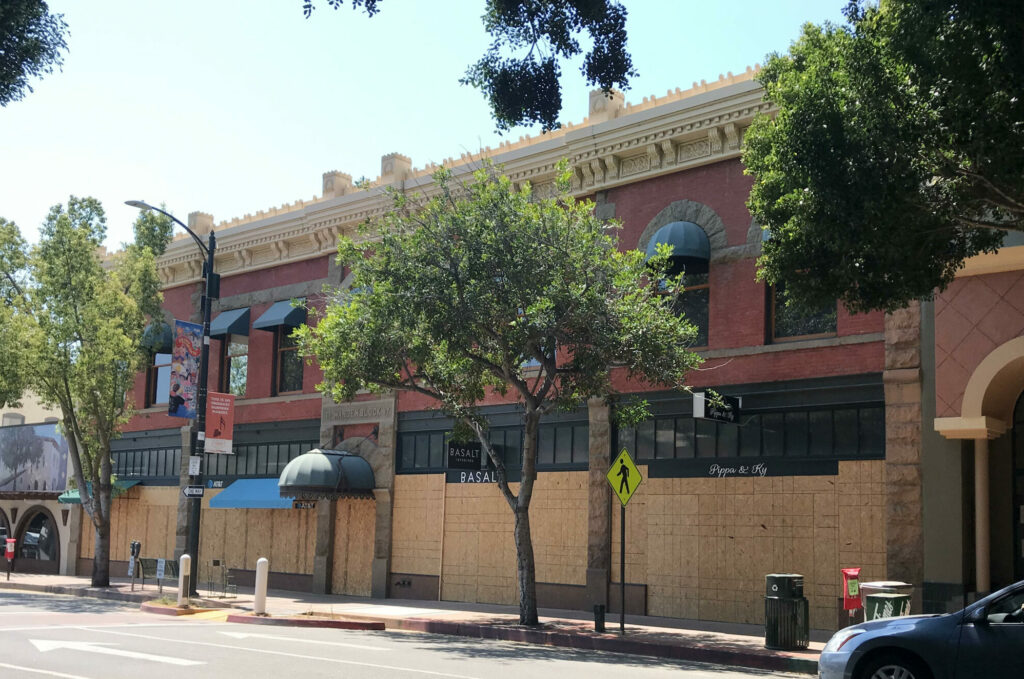 “I am in full support of the Black Lives Matter movement,” Harmon told CalCoastNews on June 4. “I collaborated with the leaders of this march to write a statement. We worked together on it. The number one thing for them is declaring racism a public health emergency.”

Tianna Arata’s mother Michelle Arata then posted a demand for money on Instagram that she also sent to select local businesses. The Instagram post describes boarding up windows as perpetuating fear and hate, and demands businesses pay reparations through financial donations to BLM.

“This money shall be equivalent to the amount of money and time they spent upholding fear in investing boarding up shops, and using their visibility in our community to undermine true progress,” Michelle Arata posted on Instagram. “This is grossly irresponsible.”

A handful of business owners, many afraid to have their names disclosed because of fears of retaliation, said the message was followed by a phone call that included name calling, another request for money and a personal visit.

The protesters regularly referred to their targets as racists who had benefited from white privilege. 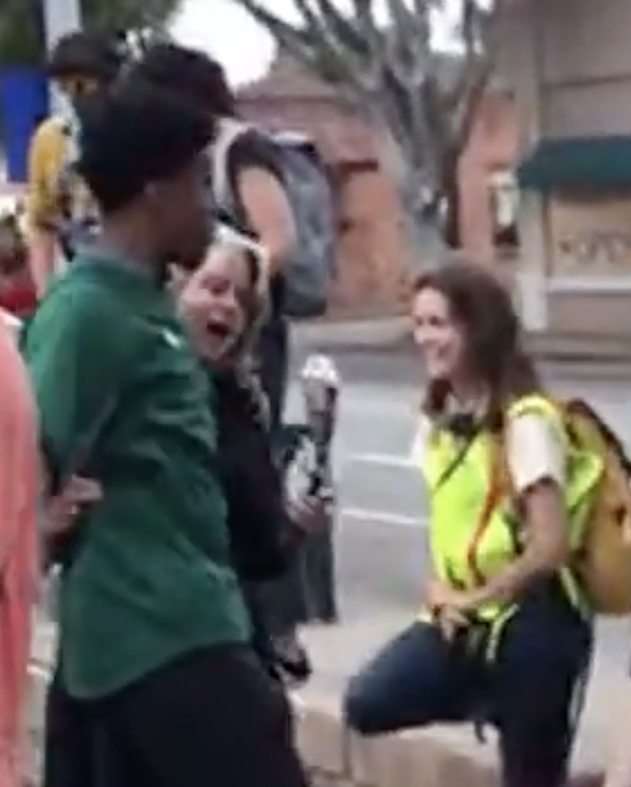 During a June 4 protest, Hamler told reporter Josh Friedman he was unsure what their demands were. Hamler then talked with Harmon, before continuing with the video interview.

“I couldn’t tell you all of the demands,” Hamler told CalCoastNews on June 4. “The mayor put together some for a press conference, for a statement that they’ll release soon about what we’re trying to do and the cause we’re trying to change. It’s a lot of stuff.”

Many of the businesses that refused to pay received dozens of angry posts on Yelp, Instagram, Twitter and Facebook, at a time they were using social media to increase sales during the pandemic.

Tianna Arata’s attorney Patrick Fisher said “the money thing is outrageous,” when asked if his client had asked businesses for money.

“She has heard these rumors,” Fisher said. “It is outrageous. She has never done anything.”

However, on her Instagram account, Tianna Arata personally demeaned a local business that refused to pay, claiming a “flagrant display of privilege.”

On July 21, donning a shirt that said “riot” on the front, Arata led approximately 300 protesters onto Highway 101 from both Osos Street and California Boulevard, blocking all lanes in both directions for nearly an hour. While on the highway, protesters ran after vehicles attempting to drive off the freeway, and blocked vehicles.

In one incident, a protester threw a skateboard at the back window of a car. The window shattered, with pieces landing on a 4-year-old boy, who was unharmed. In another altercation, protesters refused to let a pregnant woman’s parents drive her to the hospital.

Officers arrested Arata following the protest for allegedly participating in a riot and unlawful imprisonment. She was released shortly afterwards without bail. Police recommended charges, which the SLO County District Attorney’s Office are reviewing.

Arata and some of her supporters appear to be conducting a misinformation campaign. They have implied she is in jail, that she is facing 15 years in prison and that the district attorney has already filed charges against her. Meanwhile, Arata and her supporters raised more than $40,000 through several online fundraisers.

During an Aug. 5 march, in which protesters targeted specific businesses while asking prosecutors to drop all charges against Arata, local BLM organizers voiced plans to shut down businesses that do not show them support.

“We need to stop shopping at businesses that do not support Black Lives Matter,” one speaker said. “We do not need to support them. We need to shut them down.”

The almost daily protests are having a negative impact on businesses, as people avoid the downtown area because of traffic issues and closures of Highway 101 onramps and offramps.

While many businesses have refused to pay reparations, other businesses have donated money to Haile’s R.A.C.E. Matters SLO. Finney’s Crafthouse on Monterey Street donated $1,000 on July 27, according to a letter that accompanied the donation. 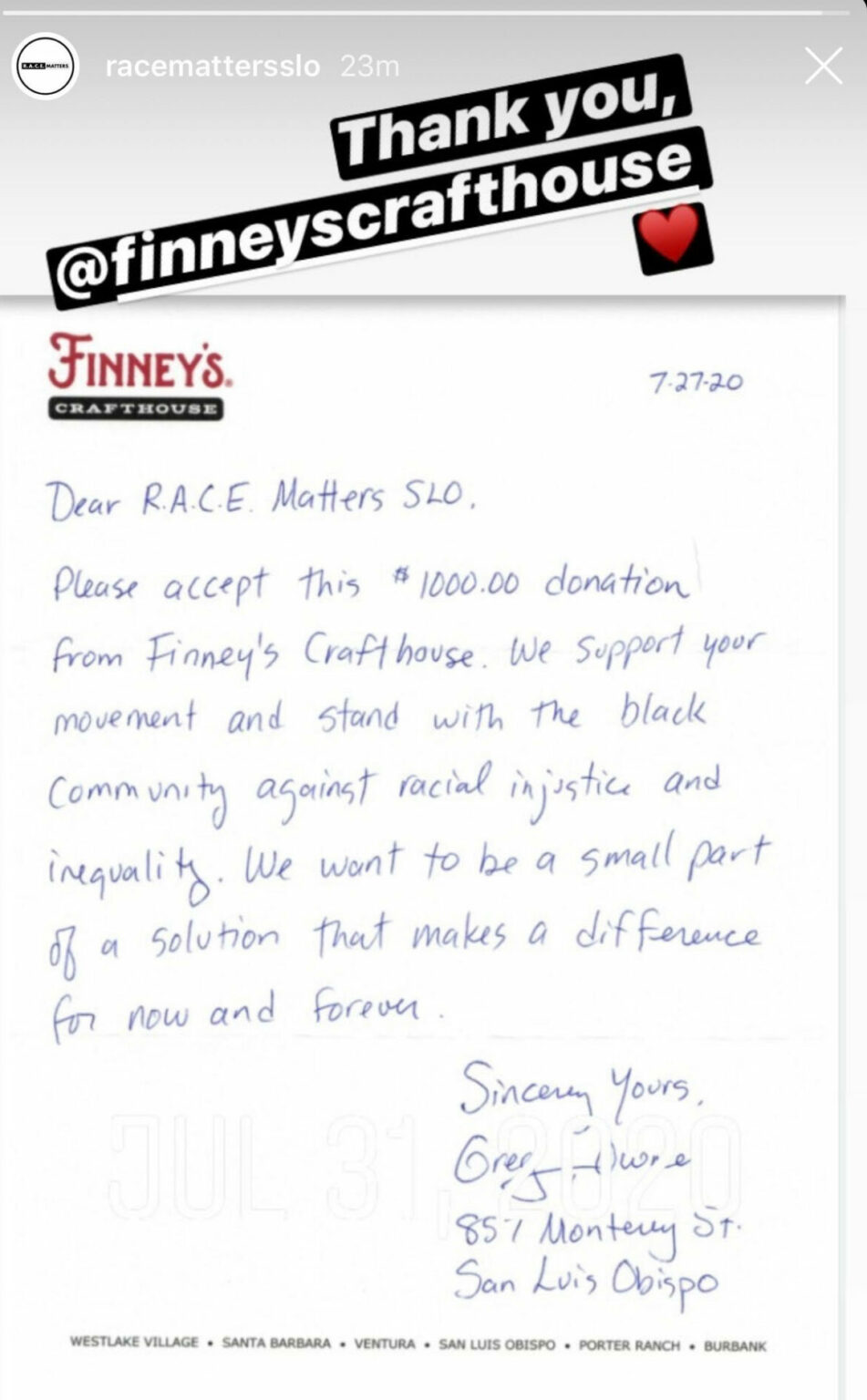