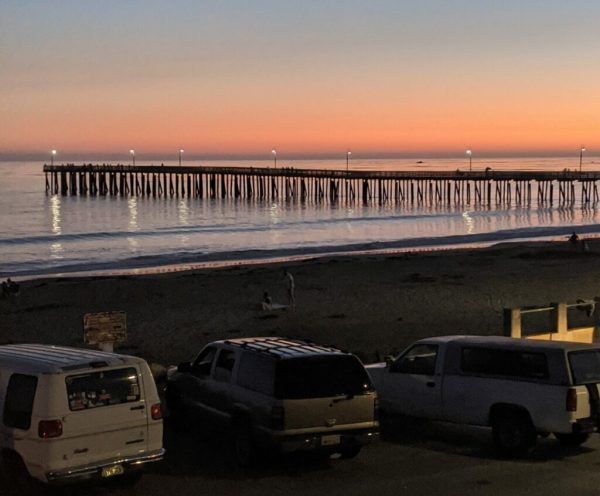 Van-dwellers are a substratum slowly popping up out of nowhere and settling throughout Cayucos, where they hope to create a profile of near invisibility. Van-dwellers are a growing phenomenon involving people of all ages who are fed up with paying exorbitant rents and by choice or necessity live in their vehicles.

Some of these people find sporadic work, or have steady low-level jobs. And some are retirees on pensions or social security.

A good friend of mine, Ben, who lived and worked around here for two decades, finally could no longer afford even a tiny studio apartment and became a van-dweller for well over a year until he raised enough money working at a dry cleaner and washing windows to move to Carson City, and rent another studio in a noisy, cramped, second-rate apartment building full of folks on pensions for $600 a month.

He worked in a liquor store for the $7.25 Nevada minimum wage and found extra work washing windows, and still struggled to pay his rent and eat. He seldom had enough money to do anything else.

“Was it better than living in your van?” I asked.

“Well, you can at least cook and maintain your hygiene, and not worry about being hassled by authorities and watch sporting events on your own TV instead of on your computer,” he explained. “But that’s about it. It’s a miserable cubby-hole, and most of my neighbors are loud and a little deranged.”

If you are a person living in Cayucos, and not observant of the details of your surroundings, these van-dwellers, formerly known as “boon-dockers,” will go unnoticed until you realize after a few months that very familiar vehicles stuffed with blankets and pillows and mattresses, along with coolers and various sundries, sort of emerge out of the woodwork — and mostly park in our lots and along the seawall.

Some of the owners of these vehicles are locals, surfers, or from other parts of the county and even the state, and some work or worked low-level jobs before the pandemic.

Besides the vans, they often live in eccentric make-shift homes away from home-variations of vans. A couple rusted, decades-old Toyota mini motorhomes still exist. Some small, ancient school buses are rigged up. Others have camper shells on pickups. And a bunch just drive SUVs, many of which are faded and rusting, but durable.

The insides of these rigs are squared away, and in some cases, marvels of ingenuity in such cramped places.

There is a process to their existence. They know (according to Ben) where to park overnight: on side roads back from the beach, near churches, away from local residences who might report them to the police. In a radically gentrifying place like Cayucos, the best way to live as a van-dweller is to try and leave as little trace as possible of your being; so as to not create a blight in an increasingly sterile beach town, once a haven for off-color characters, and draw attention from patrolling police officers protecting the wholesome image and home values of local citizens.

The van-dwellers of Cayucos, compared to those elsewhere, are harmless according to Ben.

“Down in Santa Barbara, and up in places like Crescent City and Medford, Oregon, van-dwellers are often desperate, nasty, filthy and ravaging. They raid dumpsters and garbage cans and toss their trash out the windows when they stay overnight in supermarkets and Walmarts. They are like a scourge.”

Cayucos van-dwellers work at self-sufficiency and stealth. They make sure not to appear dirty or disheveled or draw attention to themselves with erratic behavior, even those drinking beer as they recline in front seats with radios on as they gaze out at the beach. Almost all own smart phones and computers to access jobs, to find the closest Anytime Fitness 24-hour gym in the area (there’s one in Morro Bay, closed because of the pandemic), where they pay around $30 a month to shower and tend to their hygiene anytime they want.

They can find healthy salads and sandwiches in the fast food joints and market delis. They can find non perishables at food banks or on food stamps. They can fix curtains or dark blockers or tints in their vehicles so they can sleep in. And they execute their days in a manner where they have plenty of time to sit on folding chairs perched on the little asphalt pathways at the edge of the Cayucos parking lots facing the sea or on a tail gate — a soda or coffee or beer beside them while reading or listening to the ocean or tossing some crumbs for the pigeons or soaking up the freedom of a life style reviled by most of America.

If they’re restless, it’s off to San Simeon Cove or the Big Sur.

Something in society or in their lives has driven them away from wherever they’re from and what they were doing, and sent them to Cayucos and this island onto itself, a new, growing species suddenly emerging from so many traditional extinctions as the rich get richer and the poor get poorer.

Trying to find that happy medium, that groove allowing freedom as well as freedom of expression in lifestyle.

Their former anxiety-clenching desperation at finding basic shelter is not something they ever felt they’d experience growing up in a country where you could pay your rent with a week of a working man’s monthly wages; and were used to having access to a kitchen with food to cook, a bathroom to bathe and brush your teeth and take a dump and urinate, not to mention a bed to fit your body and maybe a TV instead of a computer screen to lull you to sleep.

My pal Ben, a very large man and former college basketball player, who is now van-dwelling in Coos Bay, Oregon, said, “Oregon has a kinder attitude toward us van-dwellers, but it gets cold and damp up here in the van. You have to take health precautions, eat right, get your sleep. I’m fortunate I’m a veteran and can hit any vet’s clinic or hospital while I’m on the road. I’m over fifty now and it’s beginning to hurt physically. But I like the idea of not paying another landlord and getting little in return, and of having a trade that allows me to wash windows wherever I go. Maybe I’ll settle in a place where hopefully I’ll feel comfortable as a van-dweller. Where I can sit in a Starbucks or McDonald’s and not feel like an intruder, a scourge.”

“Whenever there’s too much money in town, it’s time to go.”

2 Comments about “Sleeping in vans in Cayucos”