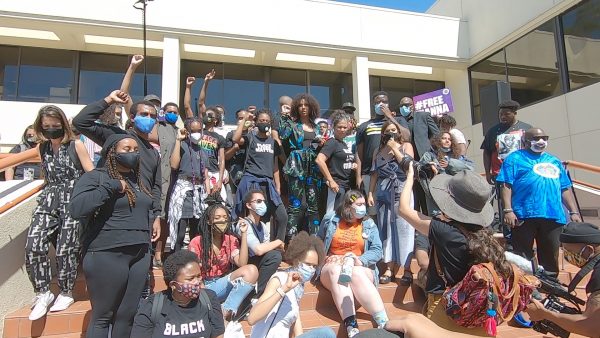 The gathering held outside the San Luis Obispo Courthouse drew a few hundred people, including Arata, who made her first appearance at a public demonstration since her July 21 arrest. Arata also delivered a speech and led chants at the rally.

“I heard that some of the folks in SLO were saying that there were buses of people coming up to stand with Tianna, and they right,” Abdullah said. “We got up at three o’clock in the morning, got on the bus and we’re here to stand with our sister Tianna Arata.”

While Abdullah said critics were correct that demonstrators were getting on buses and coming to SLO, they were wrong in claiming the activists are paid.

Kendrick Sampson, an actor who appeared in The Vampire Diaries and other television shows, also spoke at the rally.

The event also drew several dozen counter-protesters, who stood in and around the intersection of Monterey and Osos streets, some holding American flags and at times chanting “liar” in reference to Arata.

After the completion of the rally, San Luis Obispo City Manager Derek Johnson and Police Chief Deanna Cantrell held a press conference addressing criticism of the city and the police department.

“Tianna Arata was arrested for her own actions, for her own behavior, her own decisions,” Cantrell said. “She broke several laws. She committed several crimes. She recorded herself committing those crimes.”

Arata declined to give comment to CalCoastNews during the rally.