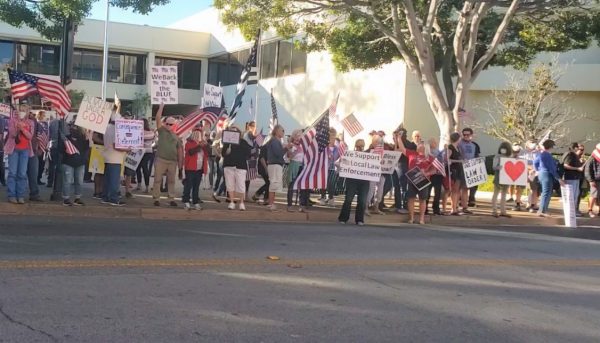 Demonstrators arrived with United States flags, pro-police flag and signs with messages including, “God bless DA Dan Dow,” “we support Sheriff Parkinson,” “we support law and order” and “back the blue.” Some demonstrators wore Trump apparel.

“We’re here because we love all people, don’t we?” Jennifer Grinager said in a brief speech at the beginning of the rally. “We’re not just for black lives. We’re holding up all lives. And that is not a racist thing to say.”

The event began with demonstrators singing “The Star-Spangled Banner” and reciting the “Pledge of Allegiance.” After demonstrators walked over to the sidewalk along Monterey Street, numerous drivers honked in support of the crowd while driving by.

Some supporters of Dow and local law enforcement said they reject the claim that systemic racism currently exists in SLO County or in the United States.

Thursday’s event was held two days after supporters of Tianna Arata held a rally demanding that Dow not file charges against the protest leader, whom San Luis Obispo police officers arrested on July 21. Dow is expected to soon announce a decision on whether or not prosecutors will file charges in the case.

Police officers on bicycles stood nearby during much of the event on Thursday.