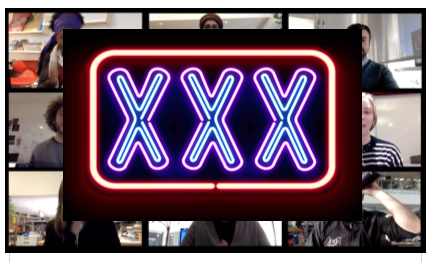 Several female attendees, including Becky McFarland, voiced their concerns about the county’s ability to host secure meetings and over Gibson’s handling of the Zoom bomber.

“Your apparent ineptitude led to the public humiliation of our group leader Emily Miggins … by a naked, disgusting, pervert, hacking our conversation and playing whack-a-ding-dong, in full view of community leaders and senior citizens,” McFarland wrote in an email to Gibson. “Worse than not knowing how to make the meeting secure, was your lack of apology as a man, to Emily, and members who were called out by name, and basically sexually assaulted online.

“So now all of us who attended your meeting, including the men, are official members of the “Me Too Movement,” McFarland added. “Thanks. I was never into pussy hats, but I went on Amazon to order some for me and my besties in the group.”

Already irritated with Gibson over his handling of homelessness and fire safety issues during the pandemic, several women used the Zoom meeting fiasco to question Gibson’s treatment of women.

“Throughout our community you are known as a man who talks over women and disbelieves what they tell you, what they have heard with their own ears and seen with their own eyes,” McFarland wrote in the email. “We are tired of your bullshit. Forgive my language (I will repent in my prayers tonight, I am sure Jesus will understand).  Come to think of it, the bombers display yesterday is how I think you feel about our town and our concerns. We are tired of being told ‘Bruce only thinks linearly,’ so you have to lay out your case carefully so he understands.”