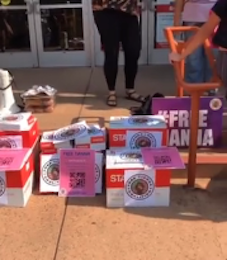 Arata supporters arrived outside the Palm Street entrance to the San Luis Obispo courthouse, claiming to have more than 500,000 signed petitions calling for Dow not to file charges against Arata. The petitions appear to be printouts of a Change.org petition that has garnered more than 544,000 signatures, as of Tuesday evening.

The DA’s office refused to accept the boxes of petitions and instead issued a statement saying it would not bow to political pressure.

“Our office is not accepting the petitions, as they have no bearing on the law or circumstances resulting in Ms. Arata’s arrest, the DA’s office said in a statement. “While mindful of the complexity and sensitivity of the broader social justice conversation, we would be in violation of our ethical duty if we were to make a filing decision based on public sentiment.

“The District Attorney’s Office remains committed to the fair, objective and fact-based review of the evidence in determining if criminal charges should be brought, and if so what charges. In short, we will follow the law without regard for political pressure or political sentiment.”

Dow has yet to announce whether or not his office will file charges against Arata. The protest leader is scheduled for an arraignment hearing Thursday morning.

Arata is asking her supporters to protest during her hearing, according to her social media posts.

In addition to attempting to deliver petitions to Dow, Black Lives Matter activists also held a protest outside the courthouse on Tuesday.